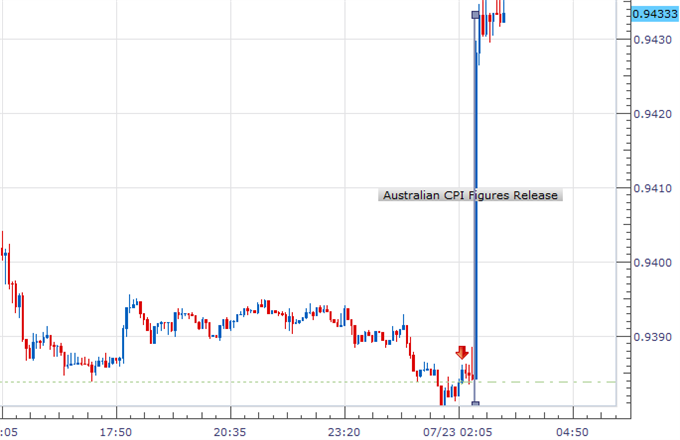 The Australian Dollar sharply rose today as the Australian Bureau of Statistics released the island nation’s inflation statistics for the second quarter of this calendar year. The quarter-on-quarter CPI came in at 0.5% - in line with market expectations and slightly lower than prior quarter’s 0.6 percent. The year-on-year CPI came in at 3.0 percent, also meeting market expectations and slightly higher than 2.9 percent from the prior period. The CPI Trimmed Mean (or “core CPI”) numbers, however, impressed traders as they were reported higher than market expectations.

The core CPI measures outpaced expectations. The 0.8 percent quarter-on-quarter figure compared to 0.6 percent expected and 0.5 percent previously. Closer to the monetary policy mark, the year-on-year figure outpaced with a 2.9 percent that was also greater than the expected 2.7 percent and 2.6 percent prior. Core inflation figures reflect the increase in prices of a basket of goods that exclude Food and Energy and contribute heavily to underlying trends in price pressures and therefore monetary policy expectations. Currently, the RBA is targeting an annual inflation range between 2 and 3 percent. If the data continues to stay in that range – or rise above it –speculation for a rate hike from the central bank will start to take root in an otherwise neutral backdrop. These early glimpses of policy pressure have lifted the Aussie dollar, but the persistence of this trend is uncertain.