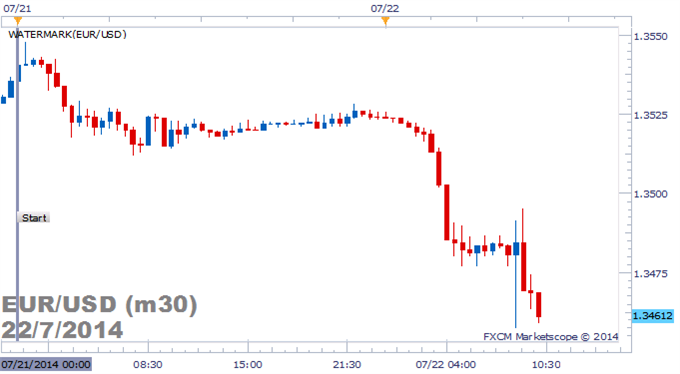 The US Dollar is broadly stronger this morning against its major peers in what is otherwise a quiet US trading session. The strength in the greenback may be due to firming Fed bets, and interest rate speculation, but all else equal, there does not seem to be a strong catalyst explaining the strength in the US Dollar.

This morning the US economic calendar was complete with several data figures, but it was June’s US CPI data that headlined economic risk. The benchmark year-on-year inflation rate registered at 2.1 percent, unchanged from prior month. The core rate (excludes Food and Energy) missed analysts’ expectations of 2.0 percent, and reported at 1.9 percent. With this in mind, there is not much inspiration for speculation that the time gap between October’s end of Fed QE and the first subsequent interest rate hike will be shorter than expected.

Later in the day the US House Price index reported at 0.4 percent, beating analysts’ expectations calling for a print of 0.2 percent. The outcome marks the highest level in two-months, and may fuel investor optimism that the US economy is recovering as the housing market is doing well.

The mixed US Data this morning was unable to inspire relief in the Euro. The single-currency bloc has been under pressure since market open on this week, and has been losing ground since ECB Draghi verbally intervened on May 8th, 2014. DailyFX Analyst Christopher Vecchio notes that it is important to be highly selective with USD-pair exposure. He says that EURUSD may be an interesting pair to express USD strength, particularly as it is breaking its July 2012-July 2013 uptrend.

See: Managing USD Expectations for EUR/USD, USD/CAD (but not USD/JPY)

See: Price and Time: Key Test for the Euro