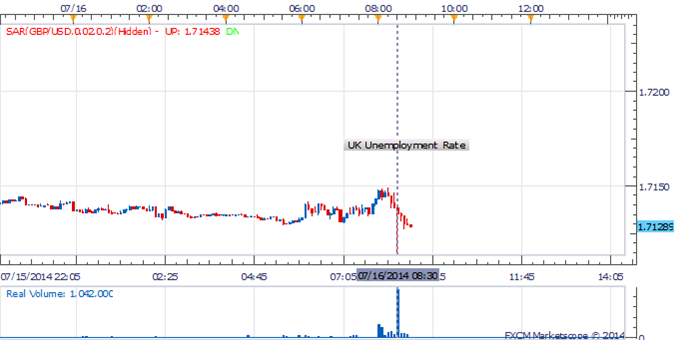 The UK Unemployment Rate, which shows the percentage of persons willing to work and actively seeking employment but who are without jobs, fell to 6.5 percent in May versus 6.6 percent in April. This reading was faithful to market expectations and the unemployment rate plunged to a 5-1/2 year low. UK Jobless Claims Change, which measures the number of people who claim unemployment benefits, but are actively seeking work, fell 36,300 in June, exceeding the forecast of 27,000 decline.

Ahead of the data release, GBP/USD ran out of gas and traded sideways, flirting with the 1.7150 level. After the data, the British Pound saw a knee-jerk dip to trade at a session low of 1.7114. Newswires cited the dip as being due to weekly earnings missing estimates of 0.5 percent versus the actual print of 0.3 percent for the month of May.

On the backdrop of a roaring set of UK CPI figures released yesterday, the better-than-expected UK jobs data may act to amplify the bias towards a sooner-than-predicted Bank of England’s (BOE) interest rate hike. It is generally understood that stronger labor force translates into more income-earning workers and greater consumption, which will accelerate economic growth and heighten inflationary pressures. With the year-over-year reading for June CPI accelerating to 1.9 percent and the core CPI moving back to the 2.0 percent BOE target, this adds a critical dynamic to the BOE’s rate forecasts – emerging inflation pressures says Chief Currency Strategist John Kicklighter.

Looking ahead, GBP/USD’s focus could turn to the second round of Fed Chairwoman Janet Yellen’s testimony, later today at 14:00 GMT. However, John Kicklighter says “it is unlikely to deviate from yesterday’s remarks”, which may mean limited volatility for the greenback.