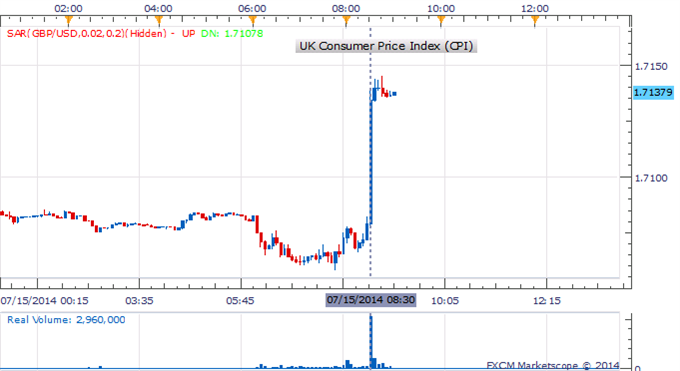 UK Consumer Price Index (CPI), which measures the change in prices for retail goods and services, including food and gas, increased to 1.9 percent year-on-year for the month of June. UK June inflation exceeded market expectations of 1.6 percent and accelerated from the prior month’s price growth of 1.5 percent.

The reading is now closer to the Bank of England’s (BoE) inflation target of 2.0 percent. Moreover, UK Core CPI, which is a measure of inflation that excludes certain items that face volatile price movements, registered at 2.0 percent year-on-year for the month of June. This beat the consensus forecast from economists of 1.7 percent, and gained speed compared to the prior month’s reading of 1.6 percent. These inflation readings indicate a turning point in what was previously downward trending price-growth.

In advance of the data release, GBP/USD was feeble as it continued to trade below 1.7100. After the data, the British Pound rose to 1.7133, a session high, against the US Dollar, breaking the psychologically significant 1.7100 handle. In addition, UK 10-year Gilts erased their gains after the inflation data crossed the wires better-than-expected, leaving yields at 2.61 percent from 2.59 percent ahead of the release. According to DailyFX Currency Analyst David Song, a pickup in the UK CPI readings may be the catalyst to generate fresh highs in GBP/USD as it fuels expectations for a BOE rate hike later this year.