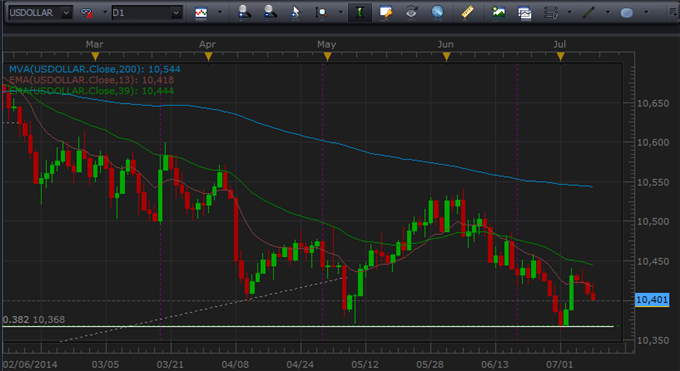 In the wake of the FOMC minutes from the June 17-18 policy meeting, the US dollar slipped against its major counterparts and the S&P 500 paced a rebound in ‘risk’-sensitive assets. This market reaction contradicts what we have come to expect from the connection between market performance and monetary policy. Through the swell of stimulus and QE-style programs, we have seen speculative appetite buoyed by the proliferation of such support programs and the local currency hurt by the subsequent swell in the money supply as well as a drop in rates. And yet, these minutes support the de-escalation of these exceptional programs, yet the response looks much like a vow of additional support was issued.

Below are a few of the noteworthy highlights in the transcript of the central bank’s last meeting:

On a fundamental basis, the known end of the QE3 program – designed to purchase Treasuries and MBS on a monthly basis to keep yields low – translates into a reduction in support for ‘risk taking’ within the financial markets. That would in turn insinuate investors, increasingly on their own in managing their exposure without the backstop of Fed support, would reduce some of their exposure. Yet, that is not the immediate reaction as we can see in equity indexes’ climb after the release.

Furthermore, the full Taper firms up a milestone that will further lead to the actual withdrawal of accommodation – in other words: rate hikes. That should in turn lift yields (the return for the currency) and the dollar. Yet, as we can see below, the USDollar extended its retreat following last week’s response to the strong employment report.

For interest rate forecasts, we have seen a tepid response in short-term Treasury yields (which typically rise as rate and inflation expectations rise). The same is true of Fed Fund futures which are instruments specifically tailored towards hedging interest rate changes (see both below). Yet, this moderate response should not be considered a measure of doubt or contradiction. Rather, we have more likely priced in much of the spirit of this report from a monetary policy perspective.

The Taper – or halt to the open-ended stimulus regime – is a first step towards actual tightening. The consistency of the central bank’s reductions since December has led the market to linearly project an end to the program at that same time. There is similar feeling towards the projected rebound in GDP through 2Q and strength through the second half of 2014. Through these expectations, we have seen shorter-term yields have been trending higher for some time – ‘pricing in’ the eventuality of a hike. This is especially true of this particular set of minutes that follow up on the Fed’s quarterly meeting where they issued forecasts and Chairwoman Janet Yellen conducted a question-and-answer press conference. 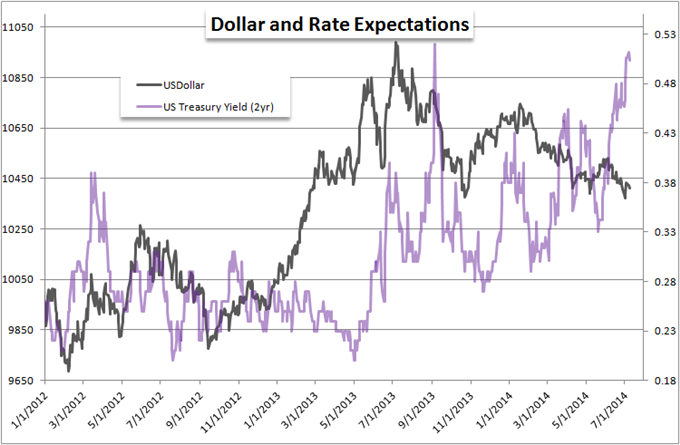 This particular report is not without market impact however. Over the medium-term, it reinforces the time frame of a change in monetary policy bearings. In particular, a first rate hike mid-2015 seems more likely. Yet, as we can see in the Fed Funds futures below, the market is still discounting their expectations for hikes. Though the end of 2015, the market sees a 0.78 percent benchmark rate versus the 1.12 percent average from the Fed’s forecast. At the close of 2016, it is 1.76 percent versus the Fed’s own 2.50 percent. There is plenty of reconciliation to be found here. 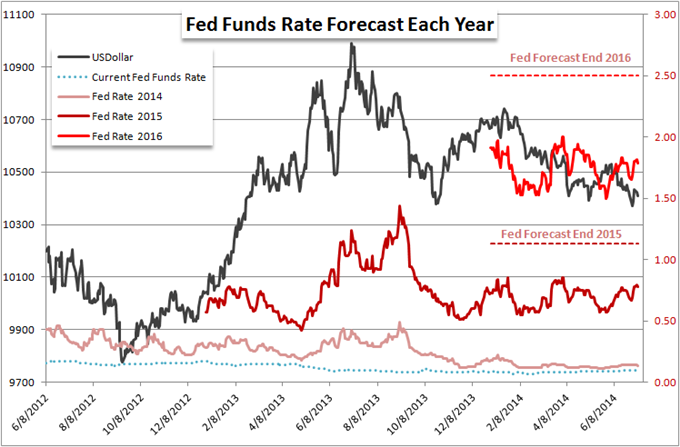 On this front, one major consideration is the composition of the FOMC board that will be voting when the proposed time for the first hike comes around. The current assumption of the group is very vague with few actually offering up a clear-cut bias so early in the game. 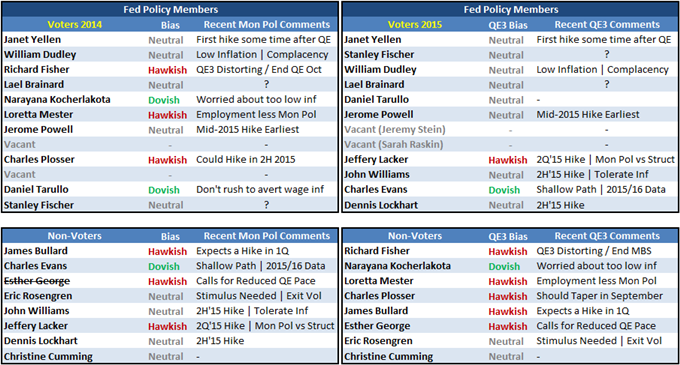