The final revision of May’s Eurozone CPI data set was largely uneventful. The headline year-on-year inflation rate is confirmed at 0.5 percent, in line with flash estimates. Though the pace of price growth is at a five-year low, the release’s market-moving potential was limited absent a meaningful deviation from forecasts considering deflation threats have already produced an expansion of ECB stimulus at June 6ths policy meeting. DailyFX Currency Strategist Ilya Spivak says that Eurozone inflation data has improved relative to expectations since the beginning of the year, opening the door for Euro positive results in the future. He says that EURJPY technical positioning hints a bounce may be ahead.

After last week’s recovery against the US Dollar, the Australian Dollar may be positioned for a test of Aprils swing high. The spotlight turns to minutes from June’s RBA Policy Meetingto see if it may just provide the catalyst needed to test resistance. RBA Governor Stevens and company maintained a neutral tone at the policy meeting earlier this month, maintaining their stance for a period of interest-rate stability. There was no pronounced deviation in their comments, so traders will look to the text for clues on where monetary policy may be headed. It should be noted that minutes from May’s meeting hinted a dovish tone in the Bank’s outlook, promptly sending the single currency lower. During the European Session on Monday morning (June 16, 2014), RBA’s Kentgave a speech in Sydney. In his speech he said the “high Australian Dollar can encourage firms to boost productivity”, but market participants should not be surprised if the Aussie falls from high levels as the RBA things it is high compared with commodity prices.

UK Consumer Price Index is expected to narrow to an annualized 1.7 percent in May, but this economic event may not generate a meaningful reaction as traders may be more interested to sort through the Bank of England (BOE) policy statement due later in the week. Late last week, BoE Governor Mark Carney said the BOE could raise rates sooner than the markets expect, sending the Pound to a new 3-week high against the US Dollar.

The spotlight turns to the Bank of England Minutes on Thursday, and traders are sure to dissect the text for a broader directional outlook regarding the British Pound. Last week, the BOE Governor Mark Carney prompted a sharp rally in the single currency saying, “the BOE could raise rates sooner than the markets expect.” This is a 180 degree turn from previous policy comments, such as, “the BOE is no rush to raise rates” and “remaining slack in the economy remains to be absorbed before raising borrowing costs.” The seemingly hawkish comment last week supported the British Pound to a new 3 week high against the US Dollar.

The Federal Open Market Committee (FOMC) headlines market risk this week and is sure to bring a bout of volatility to the forex markets. The FOMC has remained steadfast in its commitment to policy normalization, and is expected to continue course and reduce asset purchases by another $10 billion, though US data continues to struggle to obtain a firm foothold. The key spotlight on this event is the release of an updated set of policymaker’s economic forecasts as well as a press conference from Fed Chair Janet Yellen. DailyFX Strategist Jamie Saettele, CMT says the focus is lower for the US Dollar, following Thursday’s reversal, from below the 200 DMA. He says the cleanest levels of possible support are 10435 (former low and 61.8% retracement) and 10406.

Canada CPI headlines the last major economic event of the week. CPI is important in the context of Bank of Canada monetary policy. The headline inflation is expected to accelerate in May to 2.1 percentCPI miss may lead to a weaker Canadian dollar (stronger USDCAD), especially considering the weaker CAD in recent months should be a tailwind to inflationary trends.

With summer upon us the Canadian housing market is another area of focus and will be put to the test as people lock down purchases for the summer. One of the figures of interest will be to see if a trend materializes and unsold new inventory grows. This would prompt contracts to reduce starts, and may spill over into the existing home market. 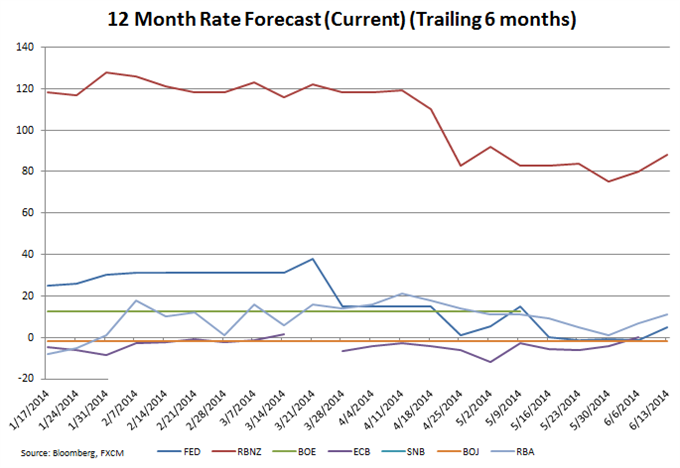