The June US Nonfarm Payrolls report can be aptly described as a “goldilocks” report: not too hot, not too cold, but just right. Right on the head, that is: the official numbers fell largely in line with consensus expectations (a rare occurrence), leading to a rather tempered market reaction. Yet the figures, while looking strong on the surface, haven’t proved to be the bullish catalyst for the US Dollar that traders were hoping for.

While the fourth consecutive month of plus-200K payroll growth is a positive anecdote for the US economy, the fact of the matter is that payroll growth did slow by -23% from the prior month (+217K from +282K); the household employment survey showed the economy only added +145K jobs; and at +2.1% y/y, hourly wage growth isn’t strong enough to stir fears of an imminent surge in inflation (which could necessitate a rate increase by the Federal Reserve).

In essence, the June US NFP report is a ‘good’ report, not ‘great,’ but more like ‘just right.’ Given the market reaction observed in the USD spectrum, it now appears market participants have raised expectations for the US economy to see +200K payroll growth going forward at a minimum, and the recent reading at the lower end of the acceptable bound suggests that US economic growth is still moderate at best.

See the US Dollar economic calendar for Friday, June 6, 2014.

US yields have fallen over the past month, but gains seen in the belly of the yield curve (3Y-7Y) this past week were supporting a modestly stronger US Dollar. Today’s data, despite the appearance of solid headline figures, has resulted in a further softening once more. This bull steepening of the middle portion of the yield curve has proven to be US Dollar negative, though losses are likely tempered with the long bond yield not leading declines. 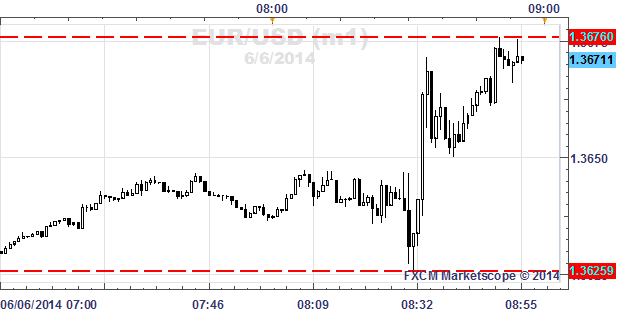 Is the low volatility slumber in EURUSD ending? Price action the past two days leaves traders hopeful as the first full week of trading is now finished. Even though the better than expected headline figures provoked a quick rally in the US Dollar across the board, price quickly reversed trend and the EURUSD jumped from $1.3826 post-release to as hiugh as 1.3676 shortly after. Within thirty minutes of the report release, the EURUSD was trading near 1.3671.