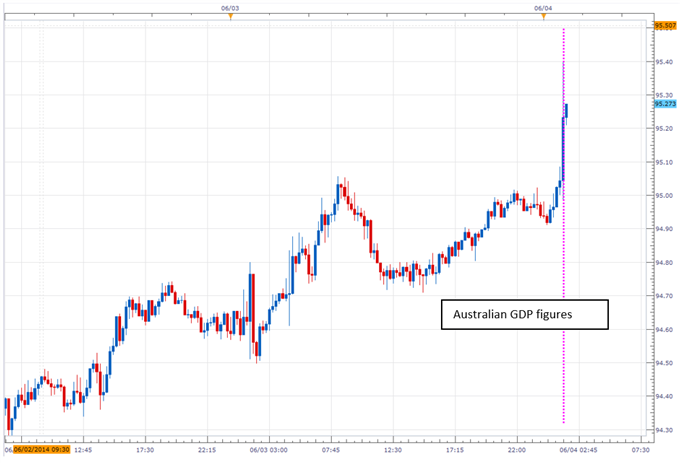 The Australian Dollar soared against the Japanese Yen after data showed that Australia’s economy grew faster than expected. The Australian Bureau of Statistics reported that the country’s Gross Domestic Product had increased by 3.5 percent compared to the same quarter last year, beating estimates calling for growth of 3.2 percent. The economy expanded by 0.9 percent in the first quarter compared with the quarter that ended in December 2013. Strong growth in exports contributed most to the upbeat outcome, although this was somewhat offset by a decline in national expenditures.

The stronger-than-expected GDP figures come despite concerns raised by the RBA during their May policy meeting that “the effect of monetary stimulus is partly offset by the downturn in mining investment and planned fiscal consolidation.” The RBA decided to maintain their expansionary monetary policy and keep their cash rate unchanged at 2.50 percent yesterday.

Crucial to watch from here will be the state of Australia’s labor market. The unemployment rate rose to 5.9 percent in March, the highest in over a decade. Signs of improvement may help feed speculation about interest rate hikes to follow the current “period of stability” favored by the RBA, helping the Aussie further. Needless to say, a soft data set stands to have the opposite effect.

Want to trade with proprietary strategies developed by FXCM? Find out how with Mirror Trader