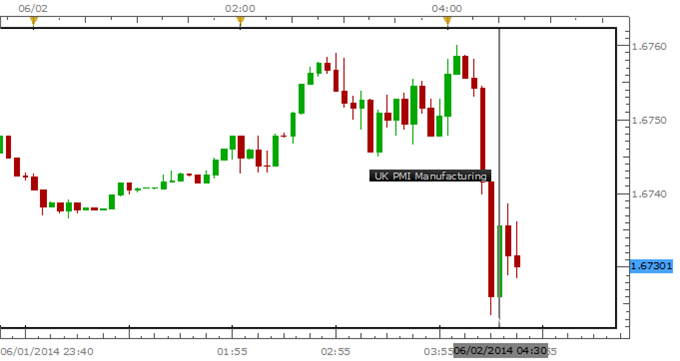 U.K. Manufacturing PMI Dips in May, GBP/USD Faces Resistance at 1.6760

Factory-sector activity fell to a one-month low as U.K. Manufacturing PMI came in at 57 in May, matching estimates. The gauge remains near the highest readings in survey history, signaling an improvement in overall operating conditions in each month since March last year, according to Markit.

The British Pound rose against the US Dollar on the data release, but the move may be limited as it has limited implications on monetary policy. Traders may decide to wait for the Bank of England Interest Rate Decision and any comments for a broader outlook on the single-currency.

DailyFX Analyst David Song maintains an upbeat outlook for the sterling. “The GBP/USD looks poised to resume the bullish trend carried over from the previous year,” says Song, “the Bank of England (BoE) shows a greater willingness to normalize monetary policy sooner rather than later.”

From a technical perspective, GBP/USD former support is now resistance near 1.6760. DailyFX Technical Strategist Jamie Seattele notes, “GBPUSD broke the line that extends off of the November and February lows, and the development is the clearest signal yet that an important top is in place.”