- US Dollar initially higher; Yen weakens across the board broadly as US yields jump.

The April US Nonfarm Payrolls report was surprising in several regards – both positive and negative. The two main headline data points, however, crushed expectations, leading to a modest USD-positive reaction in the wake of the labor market report. The headline change in NFPs at +288K and the unemployment rate dipping to 6.3% aren’t quite as good as traders were hoping for, however.

If there were concerns that a strong labor print compounded by further signs of growing wage pressure would accelerate the Federal Reserve’s policy tightening cycle, fear no more: average hourly wages are up by +1.9% over the past year, slipping from the +2.1% pace in March and down from +2.3% in February. This is perhaps the most disappointing aspect of the report, as it indicates price pressures are likely to remain soft.

The significant aspect of the report that disappoints is that the base of the labor market is deteriorating. The labor force participation decreased by four-tenths of one percent to 62.8% (a cycle low, same as October 2013); this fully explains the drop in the unemployment rate. This equates to the US labor pool shrinking by -806K in April, obviously an unwelcomed development.

Read more: USD Trade Setups for Trading Life Before and After NFPs

Here’s the data sending the US Dollar higher as traders focus on the ‘shiny’ headline numbers and ignore the ‘ugly,’ ‘under the hood’ wages and labor pool figures:

See the US Dollar economic calendar for Friday, May 2, 2014.

US yields have been steadily falling (bond prices rising), especially on the long-end of the yield curve (10Y+), but the better than expected headline US labor market figures has provoked the belly of the yield curve (3Y-7Y) gain the most ground. This bear flattening of the middle portion of the yield curve has proven to be US Dollar positive, though gains are likely tempered with the long bond yield staying capped. 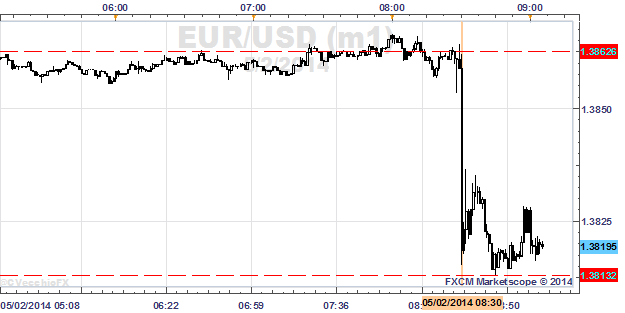 Is the low volatility slumber in EURUSD ending? Price action the past three days leaves traders hopeful as the first full week of trading is around the corner. Whereas the EURUSD was constrained in a tight 15-pip range for much of the morning, the better than expected headline figures provoked a quick rally in the US Dollar across the board, leading the EURUSD down from $1.3859 pre-release to as low as 1.3813 shortly after. Within thirty minutes of the report release, the EURUSD was trading near the lows at 1.3820.

Read more: USD Trade Setups for Trading Life Before and After NFPs