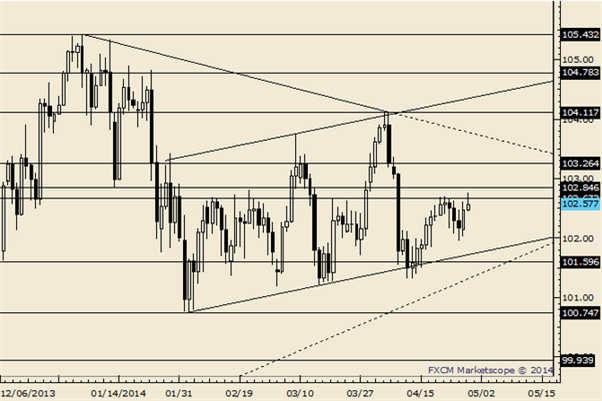 The Japanese Yen was little-changed following comments made by BOJ Kuroda in a conference earlier today following the economic outlook report. Earlier today the Bank of Japan (BOJ) refrained from expanding monetary stimulus.

“The Japanese economy is recovering moderately that growth is likely to exceed potential,” said BOJ Kuroda, “the economy is expected to grow above potential even with tax hikes.” The BOJ introduced a tax hike in April as part of the process to stimulate the Japanese financial system.

BOJ Kuroda reiterated that BOJ’s easing is having the intended effect. “We expect CPI is likely to reach 2 percent in middle of projection period, and the BOJ will make adjustments without hesitation if needed,” said Kuroda.

His optimism on the other hand does not seem to be shared across the board. “[There is] a slight difference on board on timing of reaching 2 percent,” said Kuroda, “[as of now the] BOJ is only half-way to goal of 2 percent inflation, and will continue easing until 2 percent inflation is stable.”

Regarding the sales tax hike implemented at the start of April he said that a drop in sales was basically within expectations, but will continue to carefully examine tax effects.

“BOJ Kuroda made it clear that officials do not anticipate the need for further monetary policy easing, and recent economic data is unlikely to have shifted the BOJ’s last policy-setting meeting,” says DailyFX Quantitative Strategist David Rodriguez. His focus at the moment is watching for any reference towards changing economic forecasts-particularly in light of the consumption tax hike put into effect at the beginning of the month.

From a technical perspective DailyFX Strategist Jamie Saettele says, “The rally from the February low channels in a corrective manner and makes 104.12 important from a bigger picture bearish perspective.” He says that before a decline takes hold the 103.00/103.25 rate may need to be tested again.

Taking a look at the speculative sentiment gauge shows that 59 percent of traders are long. The SSI is used as a contrarian indicator to price action, and the fact that the majority of the traders are long suggest that USDJPY may continue lower. For more information on SSI follow the link.