Get Real-Time Feedback on Your Trades with DailyFX on Demand!

The latest OECD Economic Outlook reports that the global recovery is gaining momentum, but remains uneven between advanced and emerging economies. The United Kingdom leads the recovery for the G7, whereas Japan and the Euro-zone remain on the lower-end of the spectrum. Growth in the United States is said to be affected by unusually severe winter weather and the government shutdown in October 2013 – this is expected to carry over to the first quarter of 2014. Moreover, this detrimentally affected G7 growth in the last quarter of 2013.

Abenomics yielded a rebound in growth for Japan, but a contraction is expected to follow in the second quarter due to the hike of the consumption tax in April 1st and a necessary fiscal consolidation. Overall, growth momentum continues in most major economies that saw better-than-expected fourth quarter GDP data. The report suggests that the strengthening pace of growth is reflected by accommodative monetary policy which is expected to be maintained over the next two years.

Global growth is forecast to be marginally weaker in the near-term due to the risks posed by Emerging Market Economies (EMEs) which account for over half of the world economy. Growth in the emerging markets remains mixed due to deteriorating financial conditions. EMEs felt some pressure when the US Federal Reserve began tapering asset purchases in December 2013. The Fed’s actions prompted capital outflows and exposed vulnerabilities in Brazil, India, Indonesia, South Africa and Turkey. China appears to have weathered the Fed’s tapering decision best - though it potentially faces a sharp slow-down due to balance sheet effects. EMEs are expected to utilize structural reforms to boost growth and job creation. 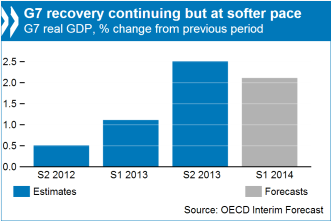 OECD's Composite Leading Indicators (CLIs) show that the underlying picture continues to reflect positive momentum for global growth – particularly as the economic recovery gathers pace in the United States, the Euro-zone, Japan and the United Kingdom. The CLIs shows a declining profile for EMEs. Many of the vulnerabilities EMEs face are attributed to structural impediments that were hidden by capital inflows: widening income-gap, stressed banking systems, and lackluster growth to name a few. A slow-down in the EMEs may negatively impact advanced economies.

Moving forward both advanced and emerging market economies may continue to face headwinds in 2014. Japan faces fiscal challenges and China faces a sharp slow-down driven by balance sheet effects. The Euro-zone remains fragile as policy makers continue to grapple with low-inflation and high-unemployment rates. The effect of the severe weather on the U.S. economy remains unclear. Recent adjustments of monetary policy in advanced economies have exposed vulnerabilities in emerging markets. At present there is underlying momentum in the global pace of growth, but the recovery remains fragile.