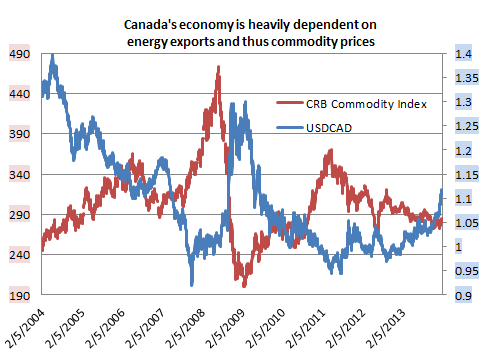 January data out of Canada showed that monthly housing starts declined from 187.1K to 185.0K month over month. This reading missed 185.0K estimates and will contribute to a long list of disappointing 2014 data. Fundamental factors continue to have a negative impact on the Canadian economy and downside risks remain moving forward.

As the Federal Reserve takes active measures to end QE3 by the end of the year, the greenback is showing strength against CAD as market participants rebalance their portfolios, wishing to weight them towards less risky assets. As the Canadian Dollar is heavily impacted by global commodity prices, it can be grouped into such risky holdings, although not to the same extent as the Australian Dollar.

When discussing commodity prices and those currencies impacted from those prices, it is critical that we discuss China. On the back of stimulus measures starting in 2009 to stem risks of slowdown contagion during the crisis, China has been the key driver of demand in raw materials and energy. Although the past 5 years have included a massive infrastructure expansion and rise in Chinese GDP, growth prospects moving forward are starting to fade. In an overextended credit environment like that in China, a slowdown could prove disastrous to the global economy and especially commodity prices. Regardless of what occurs in 2014, we can make the case that China’s demand for commodities will not exceed those boom levels in this environment.

Focusing on more near term fundamental factors, we know that data out of Canada has been dissapointing to say the least. How bad has the Canadian data been? Well, when U.S. Non-Farm Payrolls for December missed market expectations by over 100K, the greenback still gained against CAD in light of Canada’s dismal employment print also released at 13:30GMT. 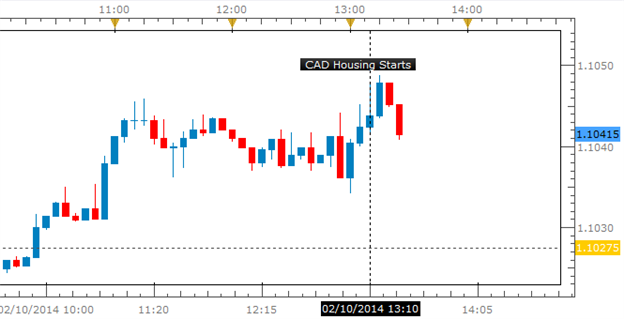 Although we saw a slight uptick in USD/CAD following the disappointing Canadian housing numbers, volatility continues to remain low ahead of the U.S. equity market open. There is no major event risk moving forward until data out of Australia at 00:30GMT.

See our comments on the January Bank of Canada Rate Decision