The Federal Reserve was kind enough to not surprise market participants this month, cutting its QE3 stimulus program by $10B as was largely expected – and was clearly signaled. After a weak December NFP report, speculation over the expected pace of QE3 diverged, but a mostly overlooked factor may have had a big impact in the weakness in US economic data in December and January: the binding cold spells.

Whether this weather intrusion is the culprit or if it’s something worse – a legitimate slowing of the economy – a disinterested and confident attitude has prevailed at the Fed. The economy has evidently accelerated with the Unemployment Rate having fallen to 6.7% in December. Any near-term weakness in data – particularly consumption data – could see a rebound with US Consumer Confidence having accelerated by to 80.7 in December, its highest level since August.

Here are the new figures as the taper cuts forward:

Market participants have taken the taper and ensuing policy statement in a mixed fashion. Initially, the US Dollar was stronger across the board, as US yields edged higher on the headline announcement of the $10B taper. However, with the US 10-year Treasury Note yield falling to 2.677% (-7.1-bps) on the day, it’s evident that the Fed’s tapering is continuing to fuel earlier emerging market fears; the move into Treasuries is driven by a demand for safety. 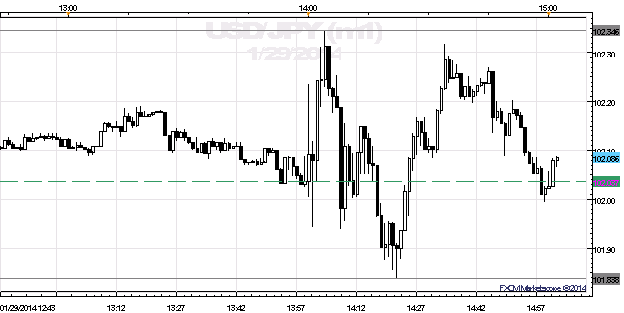 The volatility in underlying yields was evident given the sporadic price action of various US Dollar pairs after the report. The USDJPY, for one, remained barely, trading from ¥102.04 to as high as 102.35, and as low as 101.84. At the time this report was written, the pair was trading at 102.09. 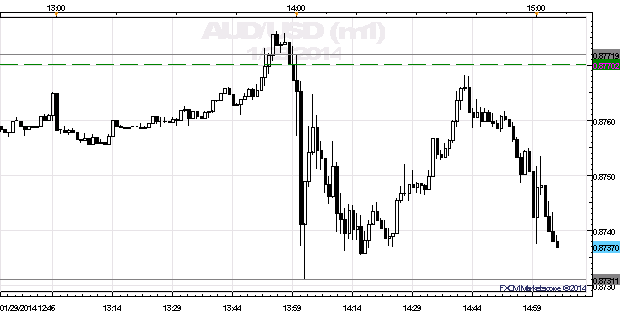 The AUDUSD traded in a 40-pip range, seeing similar volatility. After opening at $0.8770, the pair dropped to a low of 0.8731. A failure at the pre-FOMC highs has led to the next round of selling, and the AUDUSD was trading at 0.8737 at the time of writing.