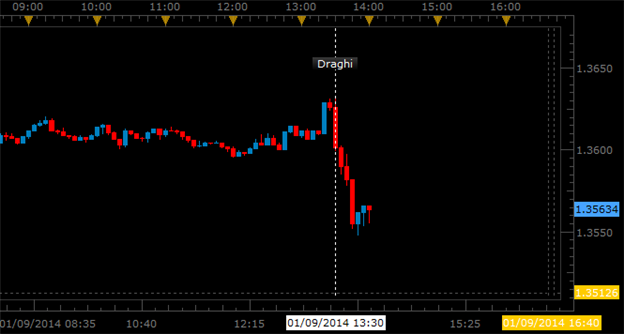 -ECB will act if there is a worsening situation in inflation

-ECB is ready to consider all instruments available

-Inflation seen around current levels for the upcoming months

-Output should benefit from gradual rise in EU exports

-Growth risks remain ‘on the downside’

The European Central Bank president Mr. Draghi read his policy statement and answered questions at 13:30GMT on Thursday following the ECB rate decision earlier where rates were left unchanged. The central bank president discussed upside and downside risks to inflation and growth in the Eurozone and reiterated that forward guidance remained firmly anchored.

Mr. Draghi spent more time discussing price levels as recent CPI figures out of the Eurozone (and notably Germany) have been broadly disappointing. The central bank president even went on to comment later in the press conference that German December inflation data distorted the EU figure. It was reiterated multiple times that the central bank would act if the Eurozone’s inflation situation worsened and stronger language was used in the forward guidance relative to past press conferences and statements. European Central Bank members have openly stated that a lower benchmark interest rate and/or negative deposit facility rates remain on the table. Mr. Draghi firmly stated that the central bank would step in and use all available instruments necessary to combat any worsening disinflation.

The Euro fell following Draghi’s initial comments and continued the move to the downside after his stronger language on fighting disinflation if it worsens in the Eurozone. The forceful reiteration of forward guidance sent European bond yields lower, most notably French 10yrs from 2.55% to 2.523% as Mr. Draghi’s Q&A continued. Following these latest developments out of the central bank, CPI data out of the Eurozone will remain key to price action in Euro pairs.

As the press conference comes to a close, Mr. Draghi is ending on statements that show he has learned from the dangers of talking up a European recovery (and therefore the Euro itself). In a possible attempt to talk down the Euro, Mr. Draghi stated that it is premature to declare a victory on the crisis and that many risks could undermine the recovery.