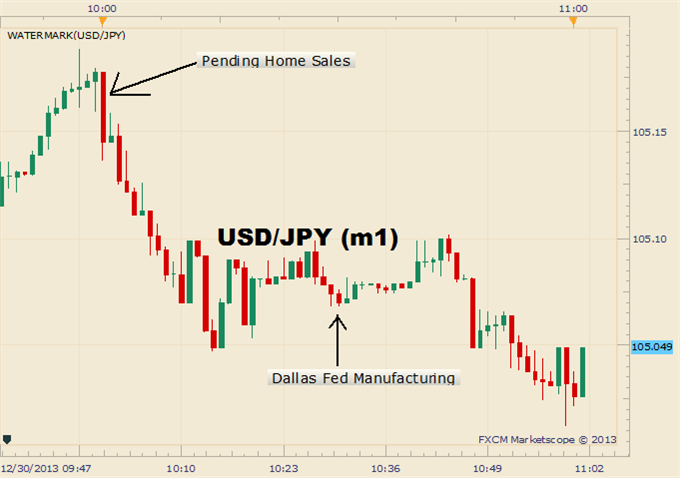 The US Dollar fell to a new daily low against the Japanese Yen, as a rise in pending home sales failed to meet expectations.

The pending sales of existing US homes were reported 0.2% higher in November, which was the first positive change seen in six months, but the release still disappointed expectations for a 1.0% rise. Also released a half hour after the pending home sales, the Dallas Fed reported that manufacturing activity fell to 3.1 in December, disappointing expectations for 4.0 and better than the 1.9 manufacturing index reported for November.

With the Fed’s taper of its monthly asset purchases underway, US Dollar traders may now be concentrating on the continued pace of the QE taper. Fed Chairman Bernanke mentioned the end of 2014 as a possible end to stimulus, but he said it will depend on upcoming data releases. If the Fed decides to slow the pace of the taper, the US Dollar may decline.

Therefore, worse than expected economic releases like today’s pending home sales may give reason for traders to sell the greenback in Forex markets. USD/JPY fell to a daily low of 105.04 following the release, and the key 105.00 figure may continue to provide resistance. Meanwhile, USD/JPY just set a new 5-year high today at 105.41, which may now provide resistance.