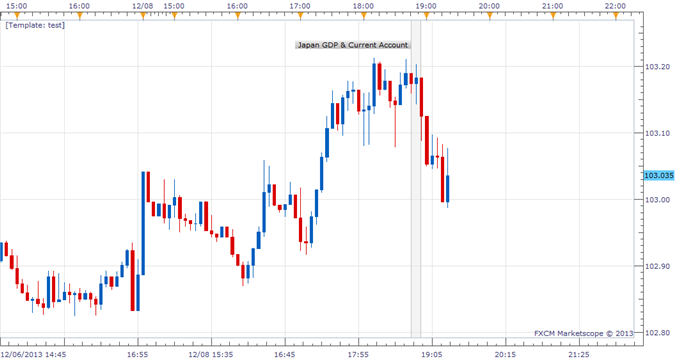 The US Dollar opened higher against the Japanese Yen, after better-than-expected Chinese Export data reported over the weekend. The outcome drove a pickup in risk appetite that pushed benchmark Nikkei 225 futures higher and weighed on haven demand for the safety-linked Japanese currency. China is the world’s second-largest economy and Japan’s biggest trading partner.

USD/JPY edged down after Japan’s third-quarter GDP report. The economy grew 0.3%, worse than the expected 0.4% and slower than the 0.5% gain in the second quarter. The disappointing outcome worked against the earlier pickup in sentiment, nudging shares lower and lifting the Yen along the way.

Also of note, BOJ Governor Haruhiko Kuroda said that the exit from the current monetary easing program may be more difficult than beforeover the weekend. This may have compounded pressure on risk appetite given a possible reluctance to expand stimulus in the months ahead even in the face of disappointing GDP growth.

From here, the spotlight will be on continued speculation about the timing of the Fed’s move to “taper” QE asset purchases and its implications for market-wide risk sentiment. With that in mind, US PPI and Retail Sales data as well as scheduled comments from Fed officials (including Bullard, Lacker and Fisher) may prove market-moving.

Japanese Data at a Glance

-- Written by Cheng Li, DailyFX Research. Feedback can be sent to instructor@dailyfx.com

DailyFX provides forex news and technical analysis on the trends that influence the global currency markets.Learn forex trading with a free practice account and trading charts from FXCM.