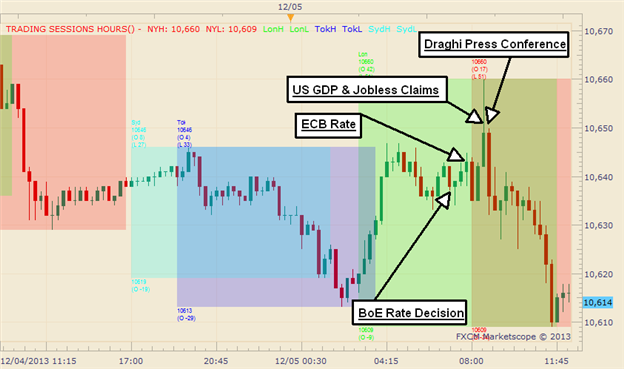 The Dow Jones FXCM Dollar Index will complete two weeks of trading within the 74 point range at the end of today, despite a flurry of greenback related trading over the past 24-hours.

The US Dollar fell about thirty points over the Tokyo session, but then erased those losses during the first part of the London session, despite a lack of significant news. The combination of the upcoming ECB rate decision and the US payrolls release on Friday may be moving prices, as traders prepare for big moves.

The releases of the unchanged ECB and BoE rate decisions had no major effect on trading, as the decisions were expected by analysts.

Then, the better than expected US GDP and continuing claims releases sent the US Dollar higher at the beginning of the NY session. But the dollar quickly gave up gains and fell to a two day low, as ECB President Draghi’s press conference got going. Apparently, many traders had expected Draghi to sound more dovish and possibly try to talk down the Euro, but the single currency instead jumped higher on Draghi’s less-dovish tone.