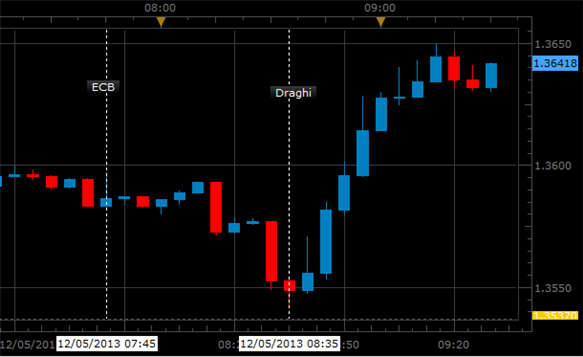 The European Central Bank left its monetary policy firmly on hold today, offering a change in neither the key benchmark interest ratenor the deposit facility rate. After the surprise 25-bps cut last month to the main refinancing rate, the ECB determined that the policy change was already having a positive impact given incoming price and survey data.

Accordingly, in absence a further deterioration in data or a return of the crisis - or significantly weaker price pressures, which the ECB does not expect ("firmly anchored") - another non-standard policy measure related to a direct capital injection into blanks on carte blanche terms is unlikely (like LTROs 1 & 2 in December 2011 and February 2012).

ECB President Draghi also used the press conference to outline the ECB’s forecasts for 2013, 2014, and 2015. Overall, low levels of inflation are expected to persist over the next few years, and “downside risks” to growth remain. The forecasts:

The Euro fell following the ECB rate announcement at 12:45GMT and took a hit following stronger than expected U.S. GDP and Jobless Claims data. During Mr. Draghi’s press conference we saw the Euro head over 100pips higher from the 13:30GMT spike low. The Euro came off after hitting the R1 daily pivot level and we may see some of the strength start to come off ahead of tomorrow’s crucial NFP print as traders pare back risk following a strong week in U.S. data.