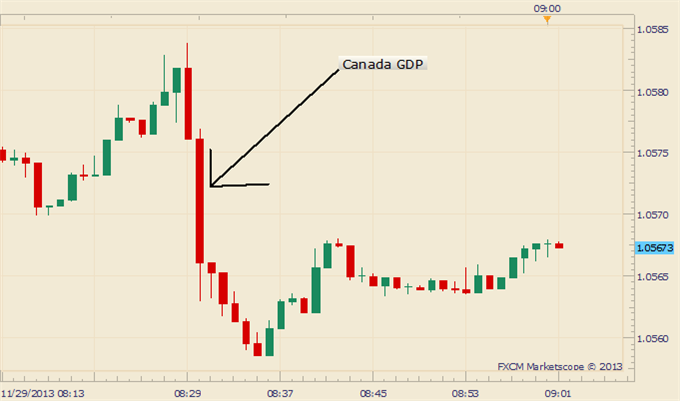 The Canadian Dollar rose nearly twenty pips against the US Dollar on news that the Canadian economy expanded at the fastest pace in two years in the third quarter.

Canada Gross Domestic Product grew by 0.7% (real) in Q3, up from 0.4% in the second quarter. On a monthly basis, the economy expanded by 0.3% in September, beating expectations for 0.2% growth and consistent with the 0.3% expansion in August. Canadian GDP grew by 2.3% from September 2012, according to Statistics Canada. Domestic demand increased 0.5% in the third quarter, while exports fell by 0.5% after three quarters of export growth.

In October, the Bank of Canada did not mention the possibility of a rate increase for the first time in more than a year, and Governor Poloz said this month that he would like to see inflation higher. The BoC also mentioned worse than expected economic activity as a reason for its accommodative stance. Better than expected economic growth may dissuade the BoC from further pursuing accommodative policy, and the release was therefore positive for the Loonie.

USD/CAD has fallen to a new 2-day low and past support at 1.0568, which was the August high, and the pair may next see support by the first monthly pivot support point at 1.0528.