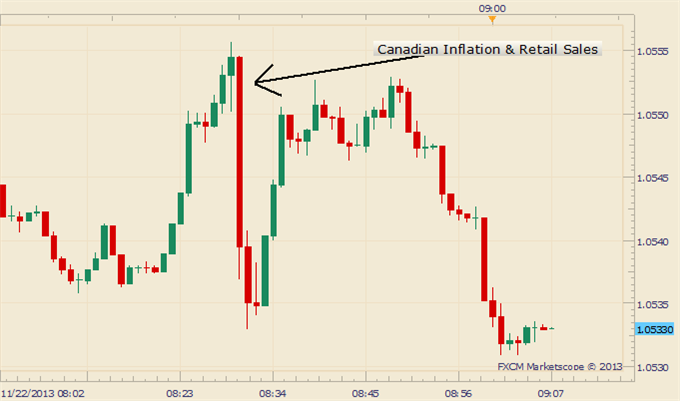 Canadian inflation fell to the lowest annual rate in October since last May, which may have hampered Loonie gains on improved retail sales.

The consumer price index was reported 0.7% higher than October of 2012, lower than expectations for 0.8% annual inflation and below the 1.1% inflation rate reported in September. Consumer prices fell 0.2% from September to October, according to Statistics Canada. The decline in inflation was attributed to a 5.1% fall in gas prices over the month of October.

Also released today, Canadian retail sales rose 1.0% in the month of September, significantly beating expectations for a 0.3% hike in sales and better than the revised 0.1% rise in sales in August. The rate of increase in retail sales was also the highest since last May.

Inflation has remained below the Bank of Canada’s target 2% rate for more than a year, but the October inflation rate also fell below the central bank’s mandate to keep annual price changes between 1% to 3%. BoC Governor Poloz said yesterday that he would like inflation to be higher, and he also mentioned significant slack in the economy as another reason the central bank is no longer considering a target rate hike.

The Canadian Dollar could not maintain initial gains, as the combination of inflation and retail sales data may have placed mixed pressure on the Loonie. Earlier today, USD/CAD set a new 4-month high at 1.0569, which may now provide resistance.