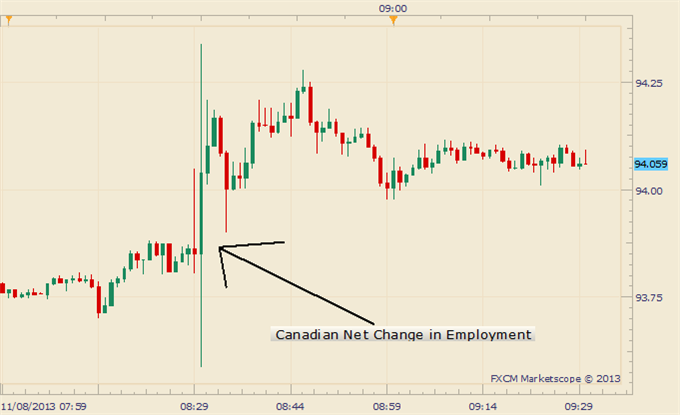 Canadian Dollar Rallies on Improved Employment, But Not Against USD

The Canadian unemployment rate remained at a 4-year low, as the labor market saw a positive net change in employment for the third consecutive month.

The Canadian economy added a net 13.2 thousand jobs in the month of October, beating expectations for 11 thousand additional jobs and higher than the 11.9 thousand change in employment in September. The unemployment rate remained at 6.9% in October, despite expectations for the rate to rise to 7.0%.

The participation rate in the Canadian labor market remained at 66.4% in October, according to Statistics Canada. Net 16 thousand full time jobs were added to the market, meaning that part time employment fell by 2.7 thousand, meaning more workers are probably moving from part time positions to full time employment.

The Bank of Canada shifted its tone in the October meeting, no longer mentioning the possibility of a rate increase for the first time in more than a year, because of lower inflation risks and worse economic activity. Therefore, improved economic releases, like the employment data we saw today, may again push the BoC to consider a rate target hike, which is Canadian Dollar positive.

However, the reaction to the Canadian Dollar was impossible to see in USD/CAD, because of the simultaneous release of US employment data. The Loonie did spike about 45 pips against the Yen following the release. CAD/JPY may next see resistance by the 200-day moving average at 94.93, right below the key 95.00 figure.