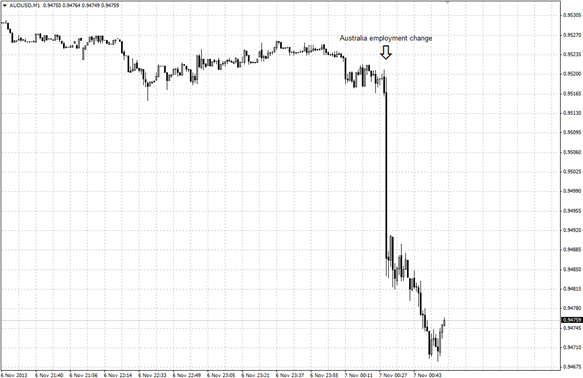 - RBA will continue to state that the Australian dollar is overvalued?

- Australia Employment Change came in at 1.1K VS. 10.0K expected

As one of the more regular market-moving indicators for the Australian dollar, it was little surprise that the currency stumbled after the release of disappointing September jobs figures. AUDUSD dropped from a near one-week high on a 55-point decline on news that Australia both added fewer jobs to total payrolls than expected and the unemployment rate hovered at the 5.7 percent level.

The headline report printed a 1,100 net increase in payrolls for the month which was materially worse than the 10,000 increase expected. This was the short-term shock value portion of the indicator. The depth was measured in the trend of the underlying data. For the jobless rate, the figure matched expectaitons – and was the same to August’s figure after an unfavorable revision – but its relevance is in its proximity to the four-year high set in July (5.8 percent). Meanwhile, the breakdown of the statistics further revealed that full time jobs plunged by 27,900 Australians – the biggest reduction since June 2012. Part-time jobs do not typically carry an economy.

Putting this data into context, the Australian dollar was already showing evidence of losing momentum. The RBA this week repeated that the Aussie currency was overvalued, but the concern of intervention is low. Yet, keeping the central bank from its eventual rate hikes is certainly a hurdle to a currency so fundamentally attached to its carry. On that point, the upcoming US data (3Q GDP and NFPs) will also keep many investors on the sidelines as they are concerned about risk trends.

Here is the full list of data (see past, present and future data in the DailyFX Calendar):

What kind of Trading best suits you? Technical or Fundamental? Short-term or Long-term? Take our Trader Survey and find out.