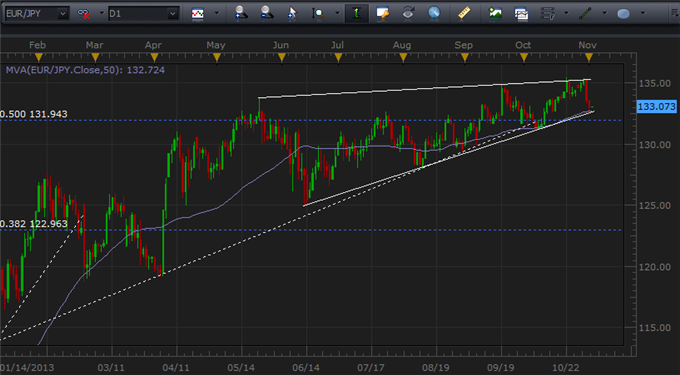 The EURJPY has enjoyed a unique fundamental strength that has driven the currency pair to an incredible 40 percent-plus rally over the past 15 months. However, that incredible run is starting to generate its fair share of skeptics as both the euro’s appeal and yen’s bearish drive are both beginning to fade. With hefty fundamental themes and clean technicals, this is a pair that can see heavy moves in the near future.

First and foremost, it is important to recognize the technical picture that we are dealing with. A daily chart of EURJPY over the past year reveals two phases for the pair. First, we have the incredible rally that began shortly after the July 2012 low was put in up until the Bank of Japan (BoJ) neared the announcement of its massive stimulus program this past April. The second stage was one of congestion that has developed since that program was confirmed – something of a ‘buy the rumor’ situation.

We are thereby left with an incredible advance now punctuated by a congestion pattern that is likely to result in a breakout. The prevailing trend suggests the upside resolution is more likely, but the fundamentals argue that balance. Furthermore, sheer momentum would suggest the greatest potential for follow through would be a break to the downside.

In fully assessing both direction and potential for this pair, it is important to breakdown the fundamental picture behind the pair. The more ‘mature’ theme behind this performance would be the Japanese yen’s depreciation. This drive was spurred in large part by the BoJ’s monetary policy efforts. As the market began to suspect that the central bank would introduce a liquidity program that would rival the Fed’s own QE efforts (when adjusted for GDP), a buoyancy arose for the yen crosses that was further supported by a backdrop of risk trends.

Ultimately, all of the yen crosses advanced on this theme; but as we can see below, EURJPY outpaced all of its counterparts. When looking for an overbought or oversold situation, it is best to identify the most overbought and oversold components. 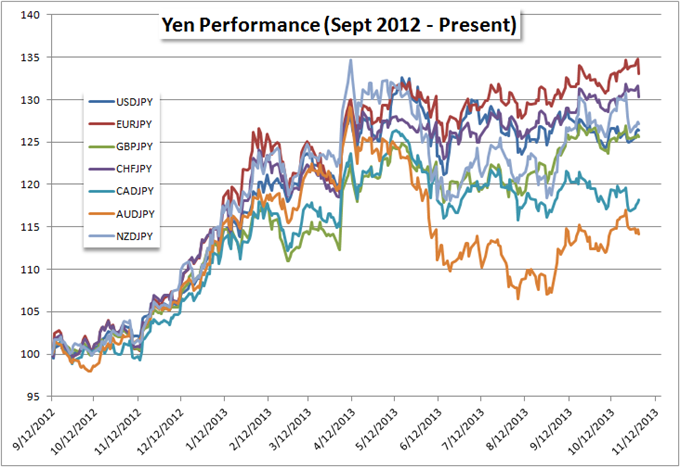 Though the euro’s own climb has been less prolific in both time and scope, it has proven remarkably consistent. Many have been caught off guard by the currency’s ability to seemingly overlook daily, unflattering headlines to continue its advance against both safe havens (EURUSD) and high yield (EURAUD) counterparts alike. That strength is in yield and reserve recovery.

During the worst of the Eurozone financial crisis, there was a serious risk that one or more of the group’s members could leave or be ejected. While some consider that a change that would improve the region’s profile, it would nevertheless introduce an exceptional change in the structure of the world’s second most liquid reserve currency. And, such structural changes would be unbecoming of a reserve. That fear lead to a significant outflow of capital from the region seeking out safety, and the subsequent stability is guiding it back in.

That return of capital, however, will eventually flag. There is still a very real risk of systemic change for the region, and a growing set of alternatives (both the Australian and Canadian dollars were added to the IMF’s list of reserves). Furthermore, as the capital returns, regional banks are attempting to attract it to their balance sheet by reducing their dependency on the ECB’s stimulus programs – which ultimately raises rates. Rising market rates against stubborn recessions, is putting pressure on the central bank to offer a policy solution. Rate cut or stimulus, the impact for the euro would be negative. 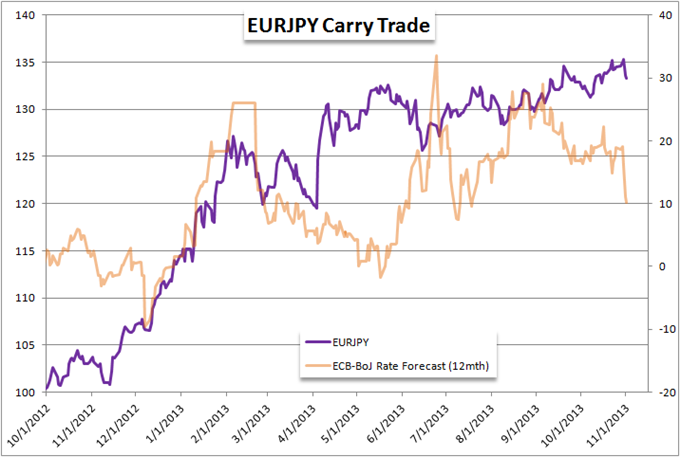 With the fundamentals in mind, it is important to take stock of market conditions. As we can see below, expected volatility (‘implied volatility’) has dropped back to six-year lows. Rather than sooth those concerned about active markets, it should speak to us as an extreme that is likely to return to a norm. Like the traditional VIX index and its relationship to the S&P 500, this volatility reading is a measure of ‘fear’ that rises as the risk of a EURJPY drop increases (as the passive carry positions are forced to be unwound). 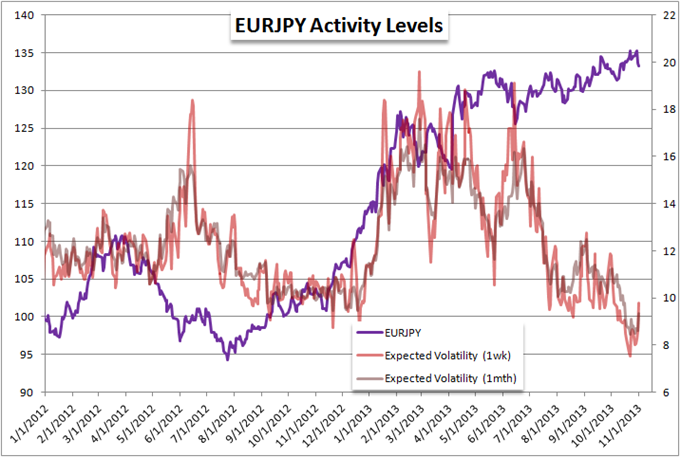 The Spark: Event or Thematic?

We have seen this congestion continue for some time, but it has refused to turn tentative breakouts into lasting trend development – whether bullish and bearish. So, what is needed to force this pair into a momentous trend?

Expecting an unwinding of exposure as the market’s confidence in the BoJ stimulus program retreat is broad issue with many pre-conditions to be met before it plays out. In contrast, a stimulus influx and override of the reserve inflows is easier to jumpstart. In the week ahead, we have an ECB decision in which it is expected that the group will comment on the record high unemployment and plunge in the region’s inflation read.

Yet, the scales of influence are truly tipped by a single consideration for EURJPY: risk trends. All of the major moving parts on this fundamental assessment all depend on one resolute detail – investors must be confident. If sentiment fails, it will expose a complacent euro, a richly-priced carry trade and a central bank’s strained effort to manipulate exchange rates. 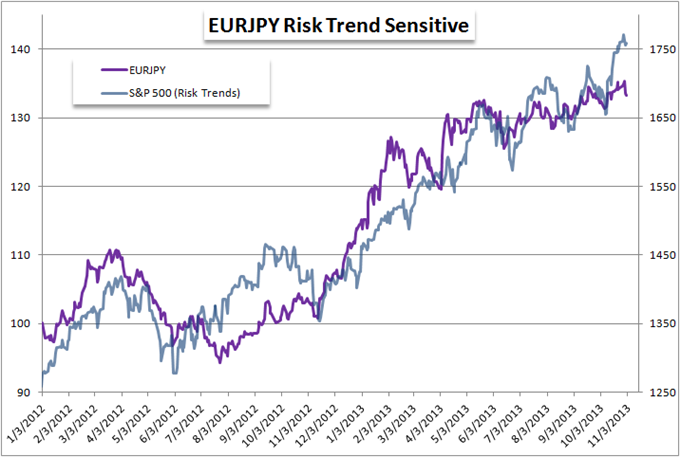 Not Just a Wait-and-See Setup

While there is incredible opportunity in the medium-term breakout from the months-long congestion pattern, it is important to recognize that this is not just a wait-and-see trade. When a break occurs, it will be made clear by its catalyst – something of the scale needed to alter risk trends or monetary policy expectations will no doubt be well covered – but in the meantime, there is a consistent range playing out.

Playing the markets laid out before us and remaining sensitive to the elements that may change the backdrop is what trading is all about.