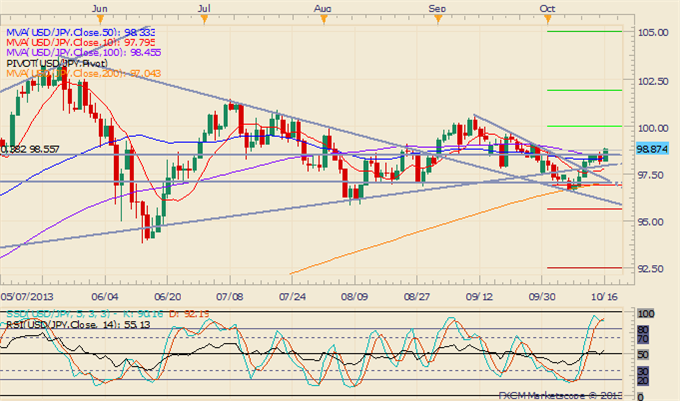 With only one day left before the US is projected to hit the debt ceiling and risk a default on debt, markets seem to remain confident that lawmakers will make a deal to push off the ceiling. USD/JPY hit a new two week high on Wednesday morning on reports that Senators are close to making a deal.

Senators representing both parties will officially meet at 11am EST. However, there is no guarantee that the Republican controlled House will accept the deal agreed upon in the Senate. Contrasting an earlier report that House Leader Boehner said the House would accept a Senate deal, a republican congressional aide reported that House republican leaders have yet to make a decision on whether or not too allow the Senate agreement to be presented to the House as-is.

The deal being negotiated by Senate Majority Leader Reid and Minority Leader McConnell would fund the government through January 15 and suspend the debt limit until February 7. The risk of defaulting on government debt is US Dollar negative because it could raise yields and weaken the US Dollar’s standing as a reserve currency. Therefore, success in avoiding the debt ceiling should be US Dollar positive.

The US Dollar rose more than 50 pips against the Japanese Yen and set a two week high since the start of Wednesday’s NY session and the recent wave of Senate deal headlines. USDJPY may next see resistance by a monthly high at 99.66, and the 98.50 level may continue to provide support.