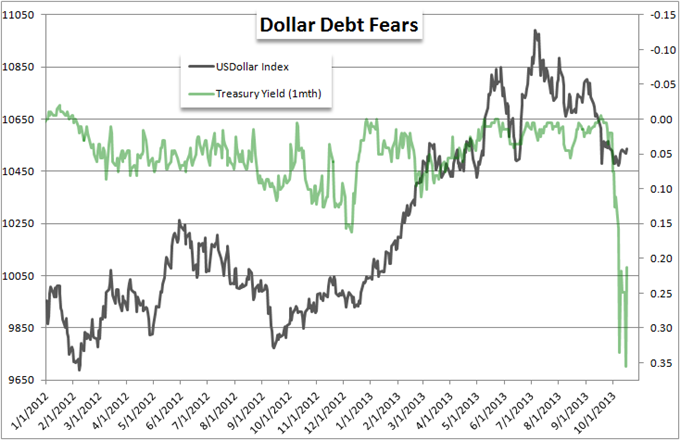 Leadership in the US Senate announced early Wednesday afternoon a deal that would raise the US debt limit and reopen the US Federal Government – closed since October 1. Rumors of a deal had circulated for some time before the official announcement, and confirmation from this side of the Legislative branch only added a modest extension of the advance carved out by the dollar, carry trades and US equities.

Sentiment behind this situation is certainly mixed. On one hand, there is hesitation in committing to a full resolution and the fundamental improvement that would represent. We have seen multiple deals approved by each house (Senate and House of Representatives) over the past weeks only to have them shot down by their counterpart or the President. However, according to White House Press Secretary, the Senate agreement has the support of President Obama. It has also been suggested that Speaker of the House John Boehner will support a Senate deal.

The complexity of this situation, however, really shows when we consider how this will impact the US dollar (an avowed safe haven) versus a risk benchmark like the S&P 500. Furthermore, does averting a disaster present optimism and a renewed penchant for buying markets that are already at record highs.

See this event risk analyzed in real time by DailyFX analysts in the DailyFX on Demand program.

The Dollar – What Is Priced In and What Isn’t

In assessing the dollar’s stake in this event risk, we can separate the situation into a short-term and longer-term influence. In the former, credit risk in US markets – particularly Treasuries – has diverted capital away from dollar-denominated assets. As the fear of impending doom for the world’s largest economy and market pass, waylaid funds will return for speculative and/or safe haven purposes and offer some lift to the US dollar. In the chart below, we see the performance of the Dow Jones FXCM Dollar Index (ticker = USDollar) versus the short-term Treasury yield (1-month bill) which reflects the immediate uncertainty in the situation.

Yet, as much as the ‘relief rally’ can play through in the dollar’s favor, it is important to recognize that there has already been some measure of expectation that this outcome would occur and some portion of the market has already pre-positioned for its inevitability. Though, that balance is unknown. The jump in the USDollar today shows some level of that belief. However, the fact that the greenback didn’t drop more aggressively in the past weeks also reflect hold out optimism.

When we look longer-term, the ‘relief’ aspect of this situation may very well pass quickly. We will also a competing theme of ‘risk appetite’ build up. As we see below, the S&P 500 generally pushes higher when speculative appetite rise (measured by the VIX volatility Index, flipped upside down for this relationship). 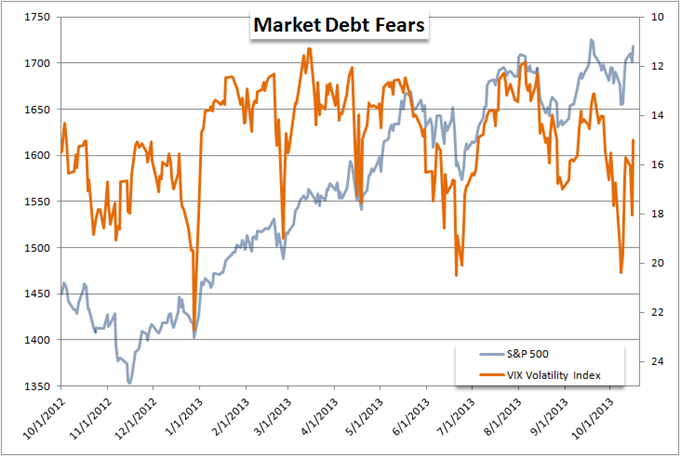 Yet, for the dollar, an appetite for yield and risk is a disadvantage. The greenback still sports the mantle of a preferred safe haven. As the relief rally effort fades, the interest will return to more pressing theme like underlying sentiment. If volatility measures continue to drop and equities rise, the dollar will feel the bearish pull. In the chart below, we see this relationship in action between the USDollar and the FX-based Volatility Index. 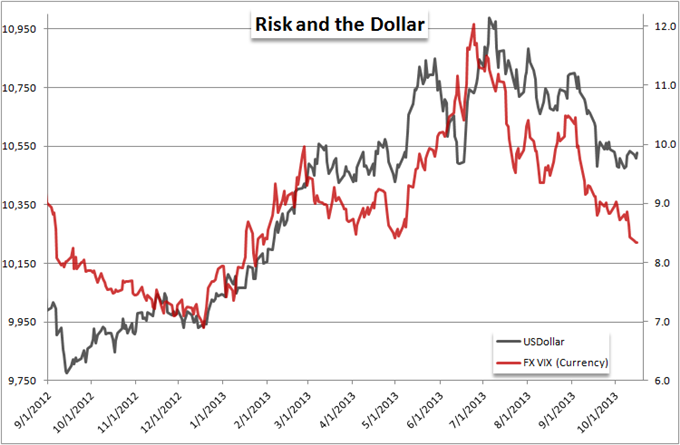 No Guarantee of Risk On

A continued risk appetite drive would certainly weigh the dollar, but there is no guarantee that such a bullish swell is in the cards. In a budget deal and reopening of the US Federal Government we are seeing a more severe crisis averted. That is a materially different outcome than finding a genuine improvement in the fundamental backdrop where growth and returns are projected to be materially better than what they were before this standoff began.

The market is growing weary of not just record highs on exceptionally low rates of return, but they are also tiring off the regular fiscal standoffs that work in conjunction with monetary policy uncertainties to significantly complicate the picture. In the graph below, we look at the performance of the S&P 500 during this debt ceiling standoff versus its progress during the 2012 (end of year into the opening days of 2013) version of the same as well as the 2011 clash that ended with Standard & Poor’s striping the US of its AAA rating. 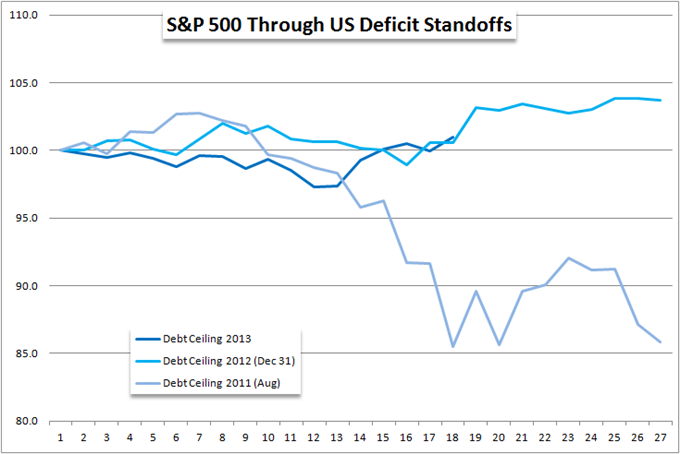 The impact between between risk trends and relief rally can be a complicating factor for many of the majors. For example, the EURUSD (below looking at a technically-appealing Head-and-Shoulders technical pattern), typically holds a positive correlation to risk trends. So as the S&P 500 gains on lower risk, it would help lift this pair. Yet, a rebound in the dollar on reduced credit risk would work to pull the pair down. One of these elements will likely overpower the other, but the conflict makes it a more complicated assessment and can curb its move. 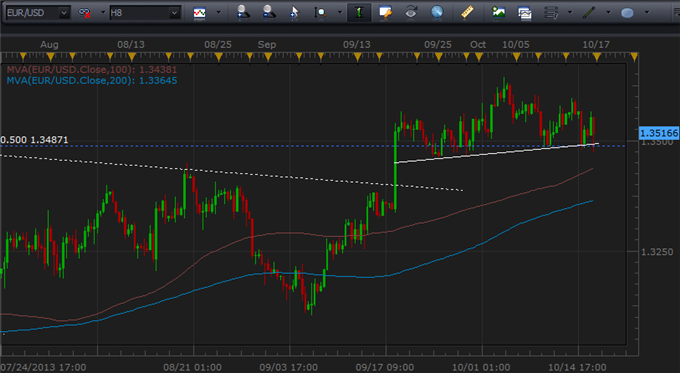 Reduce the Complications, Trade the Theme

A means to reduce the complications of the conflicting fundamental implications, we can look to a pair that potentially aligns the aspects into the same ultimate impact. For example, USDJPY would see an advance should the dollar rally as well as a move higher on a risk appetite bid.

Another way is to trading a basket of carry trade exposure. Using the long Dollar-based Carry Trade Basket on the Mirror Trader Platform, we can diversify individual pair risk and look to employ a trade on the benchmark them as well. 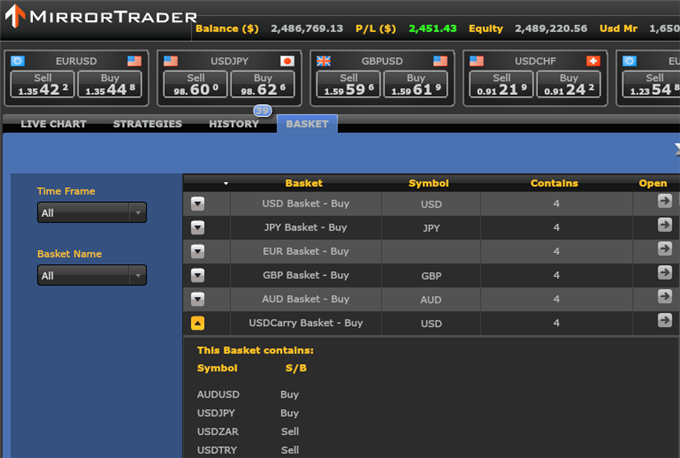