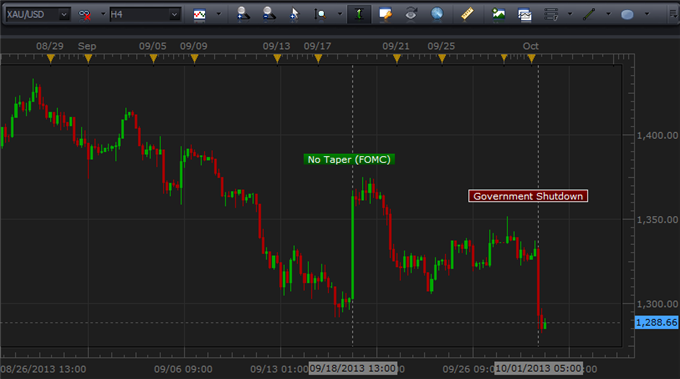 Gold tumbled Tuesday as the prospect of a government shutdown became a reality for the first time in 17 years. Congressional leaders failed to meet a midnight deadline to push through an agreeable stop-gap bill that would keep the government funded. Multiple votes between the House of Respresentatives and Senate came to a sticking point in the repeal of the Affordable Care Act (colloquially referred to as ‘Obamacare’). The Republican-led House refused to pass a bill without a delay (originally a call for a complete repeal) of the Obamacare program that officially launched this past session. Meanwhile, the Democrats-held Senate rebuffed any discuss of the already-passed program.

For gold’s part, the metal plunged just over 3.0 percent. That is perhaps one of the most remarkable moves in volatility terms from assets with sensitivity to yields and fiscal uncertainty. The only problem is that it contradicts what would typically be expected of the metal…

Historically, gold is expected to play rather clear cut fundmental roles: safe haven, inflation hedge and alternative store of wealth. The government shutdown has its pricing influences, but it isn’t a key driver. The ‘alternative store of wealth’ appeal, however, should theoretically increase substantially with this development. Yet, as we can see below, the US dollar and gold have moved lower in concert (the greenback is flipped upside down to better illustrate its relationship) and how usually that relationship is. 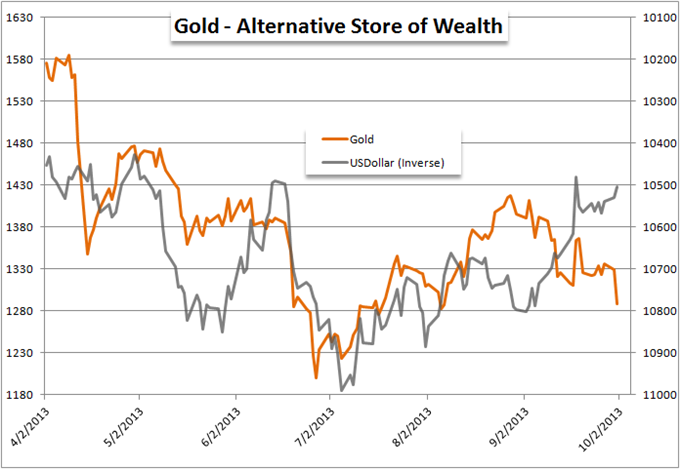 Looking more closely at the need for an alternative store of wealth, US 5-year credit default swaps (CDS) – which are insurance against the possibility that the US government will not pay its debts – have risen sharply at the same time gold extends its slide from late August. 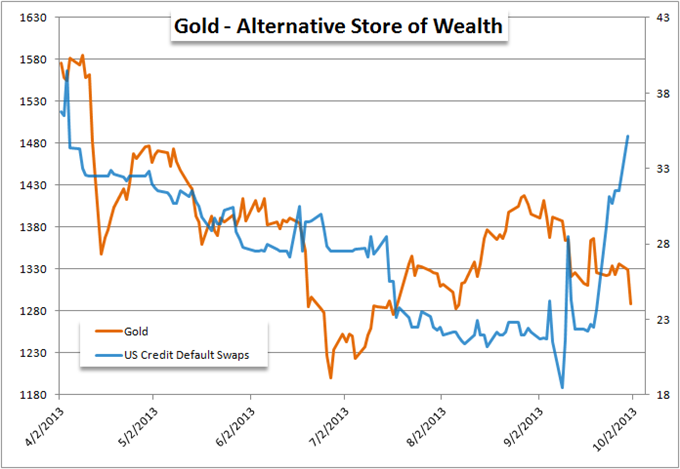 Meanwhile, the metal’s safe haven appeal has long ago derailed. As market’s generally settle between major themes, the general relationship has improved but the correlation is far from robust. 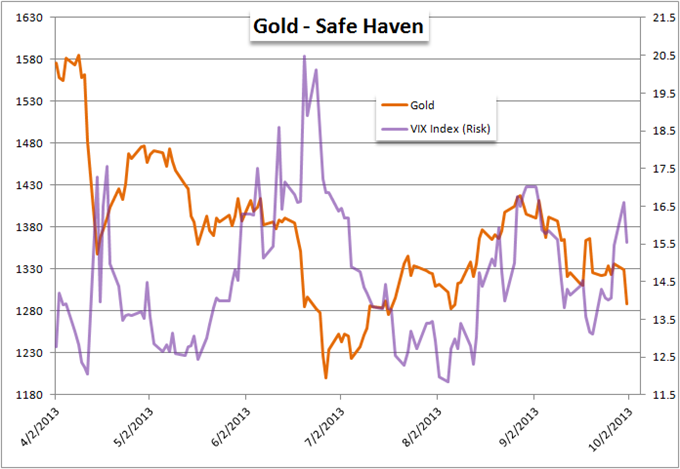 Why is this historic safe haven and frequent ‘currency’ contradicting these fundamental roles? The metal has seen its appeal significantly diminished this year due to the incredible jump in volatility in April and June. A safe haven and alternative store of wealth shouldn’t drop 14 percent in the span of two days. Furthermore, in a world where market participants are chasing fleeting returns, a metal like gold that does not offer any yield carries limited attraction.