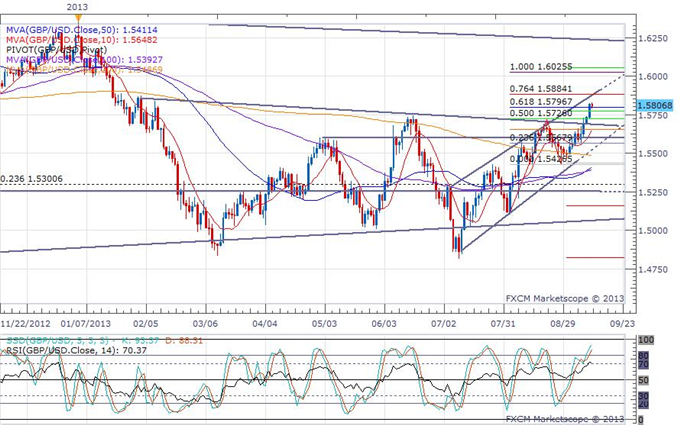 Carney Says BoE Has Not Lost Focus of the Inflation Target, Pound Rallies

With the release of forward guidance last month that paradoxically stressed the importance of both lowering inflation rates and unemployment rates, who better than a group of British politicians to try to forcefully clear up the Bank of England’s recent mixed messages.

The Pound rallied about thirty points this morning against the US Dollar during BoE Governor Carney’s and other MPC members’ testimonies to the UK parliament. Most of the rise in cable was seen after Governor Carney told Parliament members that the BoE has not dropped its 2% inflation target and the central bank is looking to lower inflation to 2% within a bit over two years.

The 2% inflation focused comments were a bit stronger than a previous declaration of a 2.5% inflation rate as the knockout level. In August, the Bank of England said it will not raise interest rates until the unemployment rate falls to 7%, with a clause that if inflation is still above 2.5% after 2 years, it will knockout the 7% unemployment target as a prerequisite for tightening policy.

Despite the reiteration of the inflation focus, Carney said that the 0.5% target interest rate may be lowered and the 375 billion Pound asset purchase target may be raised until 7% unemployment is achieved. Then Carney reinforced the Parliament’s complaints of mixed messages when he also said that he is ready to raise rates.

Carney further explained today that tightening will begin with a rate increase, and a selling of assets bought with quantitative easing would be coordinated with the Debt Management Office. When asked if the new BoE’s employment focus is loosening or tightening of policy, Carney said that it is a more effective policy, but the parliamentarian could call it a tightening.

There seems to be a lot of expectation in the markets for both the unemployment rate to drop quicker than the BoE expects and for the inflation rate to remain above the 2.5% knockout level for longer than expected by the central bank. These views were reinforced by the better than expected UK employment numbers released yesterday, and one MP mentioned that of the past 32 quarters, the BoE’s inflation forecast was too low for 29 of those quarters. The MPC members acknowledged this divergence in their testimony.

The Pound is trading around 1.5810 against the US Dollar at the time of this writing, and the pair may see resistance near 1.5850, by an upward trend line from July. Support may be provided by a downward trend line from February, currently near 1.5696.