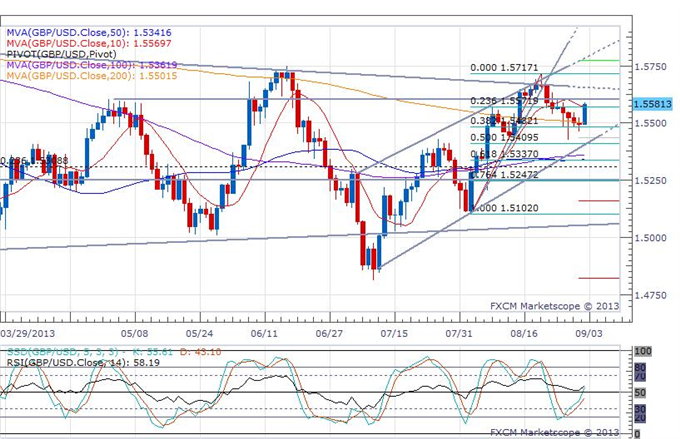 Pound Rises on an Impressive Beat of Manufacturing PMI Expectations

The UK Purchasing Managers’ Index for manufacturing beat expectations, reached a new 2.5 year high, and sent the Pound 40 pips higher against the US Dollar. The manufacturing PMI for August was reported at 57.2, beating expectations for 55.0 and up from a revised 54.8 in July.

Following the beat expectations, Markit wrote in its PMI report about its outlook for a continued recovery in the UK economy. “The sector therefore continues to build on the solid 0.7% expansion registered during the second quarter, and growth could easily break the 1.0% mark in the third quarter,” said Markit Senior Economist Rob Dobson.

The Euro-zone PMI for manufacturing in August improved from a previous estimate by 0.1 and was reported today at a new 2-year high of 51.4, up from 50.3 in July. Prior to July, the PMI was reported below the 50.0 neutral level for 23 consecutive months. The German PMI for manufacturing was actually revised lower from a previous estimate to 51.8 from 52.0, but the index still sits at a 2-year high.

The Euro-zone ended a recession in Q2, when it expanded its economy by 0.3%. “What’s especially encouraging is that the upturn is broad-based, with PMIs rising in all countries with the exception of France, where business conditions have at least stabilized after the steep downturn reported earlier in the year,” said Markit Chief Economist Chris Williamson. However, the slight revision did not lead to significant changes in Euro trading against the US Dollar.

The Pound is trading around 1.5575 against the US Dollar in Forex markets at the time of this writing. The pair may again see resistance by the 1.5600 level, while support may be provided by a rising trend line from July, currently around 1.5440.