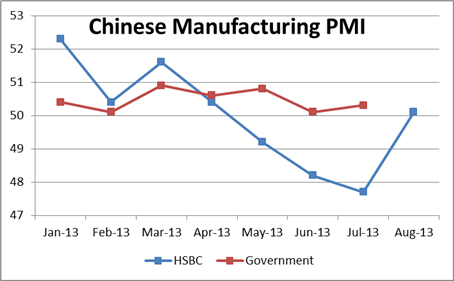 THE TAKEAWAY:HSBC reports better-than-expected Chinese manufacturing PMI, in line with the central government’s report last month > Recovery in the sector could fuel expectations for the RBA to hold off on further easing > AUD/USD Higher

The Aussie traded higher against the US Dollar as HSBC reported an improvement in China’s manufacturing sector for August. Its benchmark flash manufacturing PMI index rose to 50.1 and beat expectations for a more modest 48.2. Last month, there was a discrepancy between HSBC’s PMI and official Chinese data. While the banking giant reported a decline, the central government posted a surprising uptick. This new data now falls in line with the government’s report indicating an expansion in the industry and likely supports the recent developments pointing to a stabilization of the Chinese economy.

Whether this will compel the Reserve Bank of Australia to change its monetary stance remains uncertain. In its August meeting minutes, the central bank maintained a sluggish outlook on Chinese economic growth. Board members also considered possible further easing but not in the near term. However, this report likely fuels investor expectations for the RBA to hold off another interest rate reduction. This could increase the appeal of the Aussie for yield-seeking investors and move AUD/USD higher.

However, domestic and overseas developments will continue to drive the pair. Today’s release of the FOMC July meeting minutes reinforced expectations for the Federal Reserve to begin reducing its monthly asset purchases later this year. This week, investors will likely continue to weigh their expectations for monetary policy on Fedspeak that could come from Richard Fisher’s speech later today as well as the Fed’s Economy Symposium taking place in Jackson Hole, Wyoming that starts today and spans the remainder of the week. 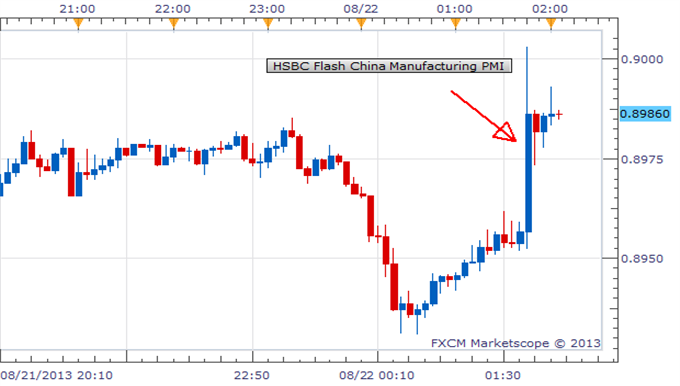