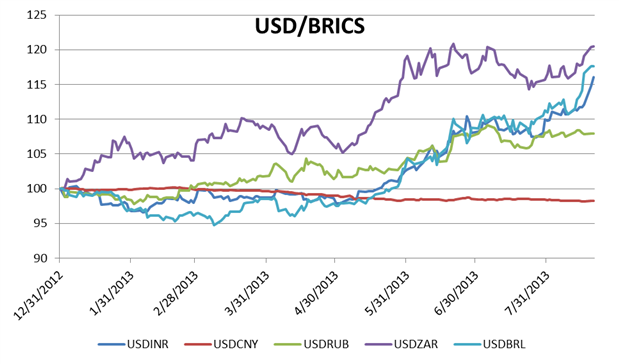 When the Federal Reserve began its massive stimulus program, its low interest rate essentially reduced risk for yield-seeking investors. With a safety net in place, speculators were able to borrow cheaply and invest in rapidly developing countries such as the BRICS where opportunities for higher returns were abundant. However, as the Federal Reserve saw a modest recovery in the U.S., it began to look for opportunities to reduce its monetary easing. This threatened investor profits and weakened risk appetite for returns, leading many to unwind their carry trade and park funds in safe haven assets such as the U.S. Dollar. As such, speculation on when the Federal Reserve will reduce its monthly asset purchases has sent the U.S. Dollar higher and its emerging-market counterparts tumbling.

In the Americas, the Brazilian Real has lost nearly 15 percent of its value against the greenback since the beginning of the year even as the Central Bank of Brazil has attempted to support its currency with three 0.25 percent increases to its benchmark interest rate. Inflation continues to be a concern for the central bank even as GDP growth forecasts have been repeatedly lowered.

Across the Atlantic in South Africa, the Rand has also suffered from inflationary pressures. The South African Reserve Bank has kept its benchmark interest rate at a 40-year low of 5 percent to encourage economic growth. Although its second quarter GDP is expected to have grown 3.3 percent year-over-year, the Rand has declined the most out of the BRIC currencies.

In Asia, the Indian Rupee has moved to record lows in recent weeks. As the Indian economy battles a growing current-account deficit, sluggish core industries, and higher inflation, the Indian Rupee has seen little relief as many investors lose confidence in Indian assets. The Reserve Bank of India has been juggling its monetary policy to support its currency without strangling its economic growth, but the Rupee has already declined more than 12 percent against the U.S. Dollar since January.

Up north, the Russian Ruble has declined the least in the same time period. However, second quarter GDP growth figures were below expectations. Slower momentum could lead investors to expect action from the Bank of Russia (Bank of Rossii) to encourage economic growth. The reserve bank has not changed its base interest rate in 11 months, which stands at 8.25 percent.

The only BRICS currency to appreciate against the U.S. Dollar is the Chinese Renminbi. Historically, the currency has been deemed undervalued due to manipulations by the central government to give China an export advantage. But recently, even with a slowdown in economic growth, the People’s Bank of China has maintained a prudent monetary policy. By allowing the Renminbi to move higher against the dollar at the expense of GDP figures, the central bank could be hinting at its intentions to transition China’s export-oriented economy towards a consumption-based one. 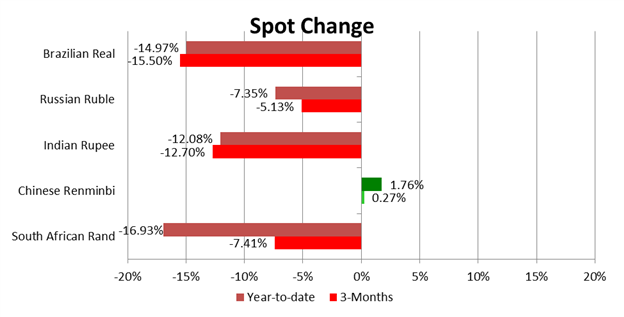 This week,developments on the U.S. frontwill likely drive movement in the U.S. Dollar. Investors will likely be looking towards Wednesday’s FOMC meeting minutes and the Fed’s Economic Symposium starting on Thursday to weigh their expectations for the central bank’s monetary policy. Rhetoric reinforcing investor expectations for a September time-table to reduce the Federal Reserve’s quantitative easing could further fuel the unwinding of the carry-trade and send the Dollar higher. 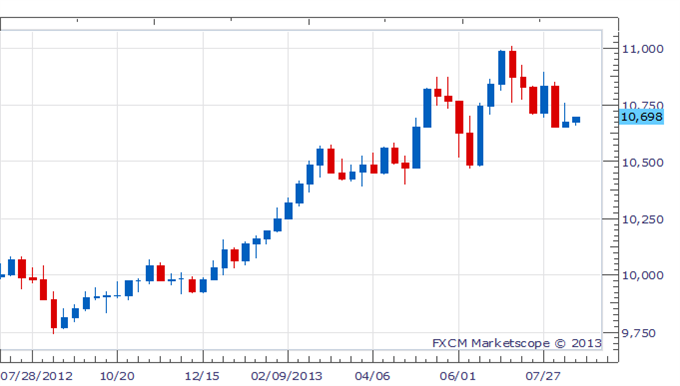