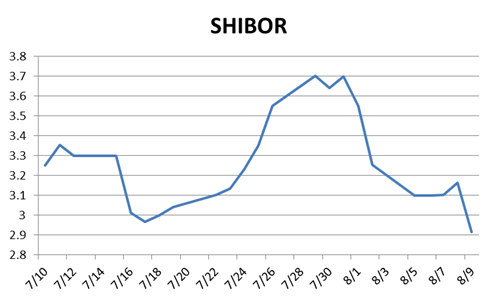 The Australian Dollar traded higher against the US Dollar as the benchmark Chinese inflation figure missed expectations with a year-over-year CPI growth reading of 2.7 percent in July. In the same period, PPI declined 2.3 percent year-over-year, missing expectations for a more modest 2.1 percent. However, a state bureau assured that the number was in line with the recent recovery in manufacturing PMI.

The relatively low CPI figure could give the People’s Bank of China scope for easing. Last week, the central bank resumed repurchase agreements for the first time since February, injecting nearly 17 billion Yuan into the banking system. Indeed, the move likely helped avoid another credit-crisis by lowering overnight lending rates to the lowest levels since May. However, this is only a minor easing effort against China’s recent rhetoric supporting prudent monetary policy. Recent improvements in manufacturing and trade likely point a stronger economic outlook that could help maintain the PBOC’s stance.

Investors trading the Aussie will be concerned with developments in Chinese economic policy because further easing by the central bank to encourage economic growth could drive demand for Australian commodity exports. An improved economic outlook for Australian business could reduce the RBA’s scope for easing, thereby moving AUD/USD higher. As such, investors will likely weigh their expectations for central bank policy on Chinese industrial production data scheduled for release later today at 5:30 GMT.

The Reserve Bank of Australia also released its monetary statement at the same time. After lowering its benchmark target interest rate on Tuesday, the central bank has now cut its outlook on GDP and CPI growth on higher-than-expected reductions in mining investments:

The reserve bank also sees slower growth in wages in the coming quarters and notes potential risks to household consumption that could lead to lower inflation. This may give the RBA more room to be accommodative towards economic growth. Another rate cut could further reduce the appeal of the Aussie for yield-seeking investors and move the pair lower. 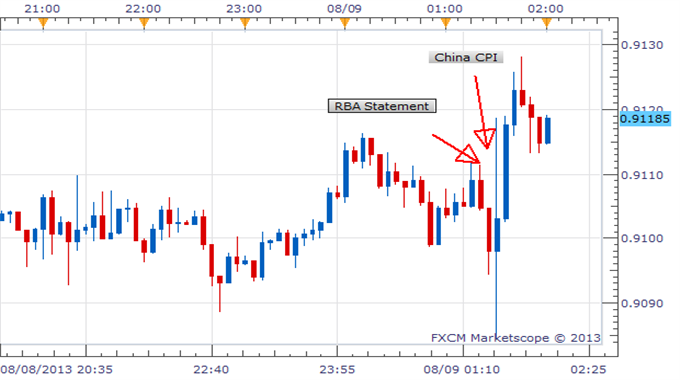