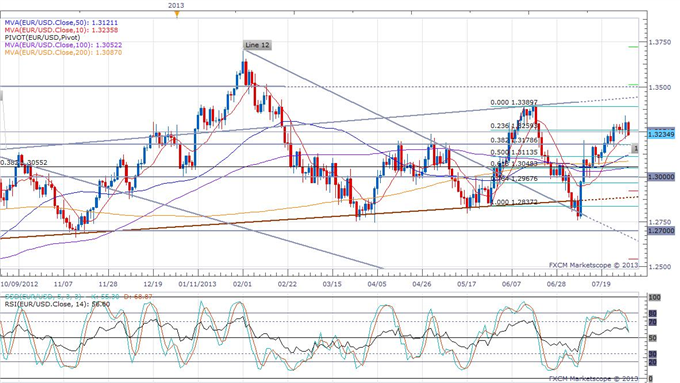 THE TAKEAWAY: Manufacturing PMI revised higher to 50.3 for July -> All Euro-zone manufacturing PMI’s rose in July, except for Spain -> Euro trading unaffected

The Euro-zone manufacturing Purchasing Managers’ Index for July was revised slightly higher and set a new 2-year high, according to Markit. The PMI for manufacturing was revised higher from 50.1 to 50.3 in today’s final estimate. It was the first manufacturing PMI indicating sector activity expansion and seen above the 50.0 neutral level in nearly two years.

The German PMI for manufacturing was also revised higher to a new 2-year high, up to 50.7 in the final revision from 50.3. The manufacturing PMI rose in all Euro-zone countries in July, except for Spain. Manufacturing production rose for the first time in the Euro-zone in July since February of 2012.

The Euro-zone has experienced six straight quarters of economic contraction, ending with a 0.2% GDP decline in Q1 of this year. The ECB predicted in June that the Euro-zone will return to growth by the end of the year, a sentiment which was seemingly supported by today’s PMI. “This hopefully places the sector nicely to provide a positive spur to the third quarter GDP numbers,” said Markit Senior Economist Rob Dobson.

However, the Euro did not react significantly to today’s slight revisions upwards. The Euro declined about seventy pips against the US Dollar over today’s session between yesterday’s FOMC release and today’s ECB decision. EUR/USD fell back below a key line around 1.3250, which may now provide resistance, and support may continue to be seen around 1.3180.