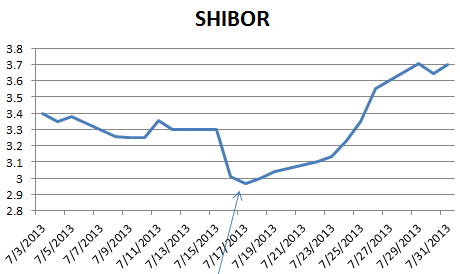 The Australia Dollar traded higher against the US Dollar after data showed the Chinese manufacturing industry improved in July. Manufacturing PMI rose to 50.3 from 50.1, beating expectations for a decline to 49.8 and remaining above the expansionary mark of 50. This data contrasts last week’s HSBC flash manufacturing PMI that reported a slowdown in the industry. As Australia’s largest trading partner, a slowdown or pickup in Chinese industrial production will likely weigh on demand for Australian exports.

Over the past few years, trade between the two countries has grown dramatically. The Aussie has also appreciated due to market participants chasing higher yields down under, but more recently the it has been breaking through support levels as markets price in a Chinese slowdown.This recent PMI data out of China may offer some relief, but other headwinds may persist and can have negative impacts on her trade partners.

On Tuesday, the People’s Bank of China injected nearly 17 trillion Yuan into the banking system through in a move that might signal rising liquidity problems. Indeed, interbank overnight rates show a steady increase since returning to normal levels in mid-July. Difficulties for banks and businesses to finance their operations similar to ones experienced in late-June could weigh on investor expectations for Chinese economic growth and subsequently the region’s recovery momentum.

After a briefly stabilizing near normal levels, interbank interest rates are creeping back up.

Expectations on yield differentials will continue to drive movement in the pair. Whether this data will compel the Reserve Bank of Australia to lower its benchmark rate to encourage economic growth remains uncertain. However, Credit Suisse’s overnight index swaps are pricing in market expectations for a 96 percent chance of a 25 basis point cut at the next RBA meeting. Indeed, the heightened expectations comes after Governor Glenn Stevens speech that suggested scope for further easing and yesterday’s disappointing building permits data that highlighted challenges the Australian economy still faces.

After the Federal Reserve left its forward guidance relatively unchanged at its policy meeting today, investors will likely look towards Friday’s Non-Farm Payrolls data to weigh their expectations for Fed policy. Despite reports last week that suggested a possible reduction in the unemployment threshold for stimulus pullback, FOMC reiterated support for easy money as long as the jobless rate remained above 6.5 percent. The Committee also recognized that lower inflation could hamper economic growth but maintained that it was in line with its long-term inflation outlook. Bloomberg-surveyed economists expect employment to fall 0.1 percent to 7.5 in July. This is supported by an earlier ADP report earlier in the day that showed the economy added 200 thousand jobs. If Non-Farm Payrolls confirms this improvement, it could fuel investor speculations for the Fed to reduce stimulus in the near term. Alternatively, a disappointing outcome could defer such expectations, boosting risk sentiment to support the Aussie. 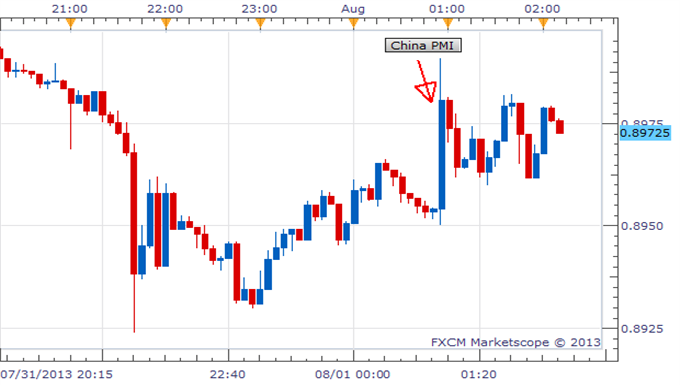