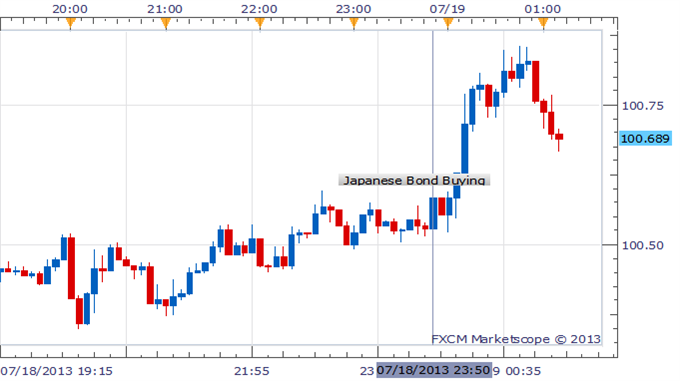 The Japanese Yen edged slightly lower against the US Dollar as data showed a decrease in foreign investment in Japan last week. Bond and stock purchases by foreign investors totaled net 0.8 and 398.2 billion yen respectively, down from 3.5 and 485.3 billion the prior week. Expectations for inflation could have driven the lower demand for Japanese assets as a devalued yen will reduce returns on investments.

Japanese investors increased their net purchases of foreign bonds and selling of foreign stocks. This could indicate a rising appetite for returns outside of the deflationary economy. Indeed, Japanese pension funds have been seeking yields abroad, moving away from domestic government bonds, as they reallocate their portfolios. The Government Pension Investment Fund, the largest in the world, recently reduced its target allocation of JGBs to 60 from 67 percent while increasing its target for stocks to 12 from 11 percent. An advisory panel also discussed other assets including foreign assets and infrastructure that the fund could invest in. Japan’s Pension Fund Association has already moved into overseas infrastructure, pouring capital into harbors and energy projects. Its chief investment officer, Hamaguchi, has urged the government to provide support for such developments in Japan. A wider implication for decreased demand for domestic bonds is higher borrowing gosts for the government that could balloon Japan’s already massive public debt.

Looking ahead, Japanese parliamentary elections are scheduled for July 21. A win for Prime Minister Shinzo Abe’s party could support expansionary fiscal policy to encourage economic growth. This could fuel further expectations for inflation that moves the Yen lower.