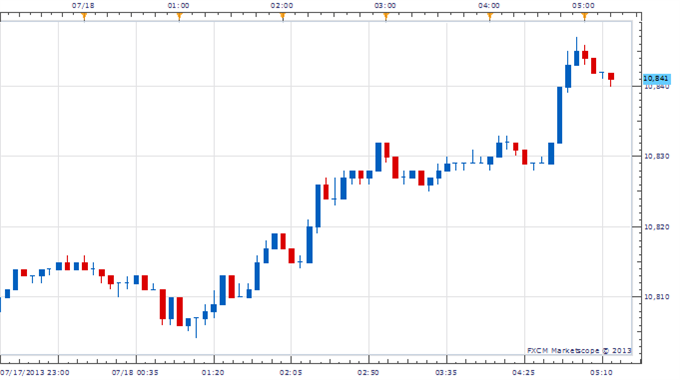 THE TAKEAWAY:G20 to meet in Moscow > Focus likely to be on central bank policies and job growth > Markets also looking at second day of Bernanke Congressional testimony

The G20 Summit is due to begin in Moscow later today to discuss various global economic issues. One major theme likely to be present is the so-called “currency wars” between central banks to achieve favorable economic conditions for growth. Stimulus programs conducted to encourage economic growth have sparked allegations for deliberate manipulation of currency even as officials remain indifferent on currency levels.

Federal Reserve policy will likely be a talking point for the finance ministers. Officials from emerging markets will likely express the need for cooperation in the Federal Reserve’s strategy to reduce stimulus as recent expectations on policy has fueled unwinding of carry trade. However, investors will likely focus on the second day of Chairman Bernanke’s Congressional testimony tomorrow at 14:00 GMT.

Bank of Japan’s stimulus efforts could also be on the table as second quarter economic data seemed to suggest its effects in improving inflation and industrial production. After endorsing Japanese plans for expansionary policy in April, finance leaders will likely examine the strategy again to promote continued growth. With Japanese parliamentary elections due on July 21, a win for Shinzo Abe’s party could support more stimulus efforts that could be made stronger by another G20 endorsement.

Global economic growth remains a priority for the G20. The International Labor Organization has urged the group to discuss ways to encourage job growth as unemployment rates have remained stubborn, and the Organization for Economic Cooperation and Development has called for dialogue on preventing tax-evasion as Europe navigates a fragile recovery.