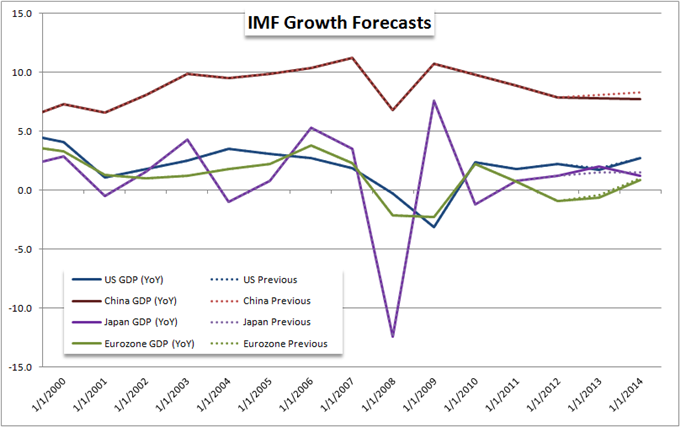 Following in the footsteps of the World Bank, the IMF has slashed its forecasts for global growth. Despite improving sentiment over the past few weeks regarding the U.S. economy, recent fears of a September taper have contributed to the negative adjustment in the US 2013 growth outlook. Combined with further trouble for the Eurozone and China, the world’s primary engine for growth looks like it will have a difficult time hitting the clip of growth needed to run without the support of stimulus.

Speaking on one of more consistent downgrades for the developed world, IMF Chief Christine Lagarde was on the wires commenting on the troubles plaguing the Euro-area as bond yields lurched higher. Yet despite her essential approval of austerity measures in Europe, she referred to the US budget cuts as “inappropriate.” This recognition of fiscal pressure likely further contributed to the lowered growth estimates despite for the US and global assessment. A remarkable turn of events, Japan seems to be the sole benefactor from the updates thanks to the aggressive stimulus programs adopted by the Bank of Japan as well as the Japanese government’s ‘Three Arrows’ program..

The downgrade in growth forecasts seems disparagingly uniform. Part of this no doubt relates to the fading market confidence in response to the Fed taper talks. The threat of tempered support by the world’s largest central bank is spooking world markets and sending bond yields while simultaneously guiding capital out of risky positions and leverage. Alongside this US concern, China’s credit bubbles and the constant threat of a return to crisis for Europe presents a constant risk of turning concern of a slower pace of growth into fear of financial instability as capital flows reverse to safety.