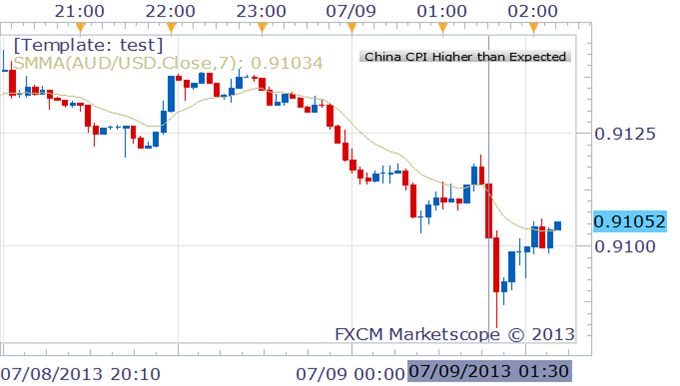 The Australian Dollar traded lower against the US Dollar after inflation for China in June marked a 2.7% increase year-over-year and beat economists’ expectations of 2.5%. The Consumer Price Index tracks price changes in a basket of consumer goods and services and serves as a benchmark for measuring inflation. This higher-than-expected result may compel the People’s Bank of China to maintain their “prudent” — according to Governor Zhou in a statement on June 28th — monetary policy to control inflation. Amid recent liquidity problems and economic slowdown, ‘tight’ monetary policy could weigh on Chinese industries that drive demand for Australian exports, moving AUD/USD lower.

Other data released include a survey that reported deteriorating Australian business conditions but marginally improved sentiment. The NAB survey printed -8 from the previous -4 for conditions and 0 from -1 for confidence. These data could help the RBA determine future monetary policy, specifically if there is a need for a rate cut as they maintain their “scope for further easing” — a term used in their latest rate decision statement — which could also move the pair lower.

At the time of this writing, AUD/USD has recovered slightly from the earlier fall. These reports did not seem to have a significant impact on the pair as investors look toward the release of the Federal Open Market Committee’s June meeting minutes scheduled for Wednesday at 18:00 GMT and Federal Reserve Chairman Bernanke’s speech at 20:10 GMT. Rhetoric from these releases will likely influence investors' expectations on the Fed’s timetable for reductions in quantitative easing which could affect risk sentiment. A dovish tone could fuel risk appetite, pushing the pair higher whereas a hawkish one could lead investors to further unwind carry trades, weighing on AUD/USD.