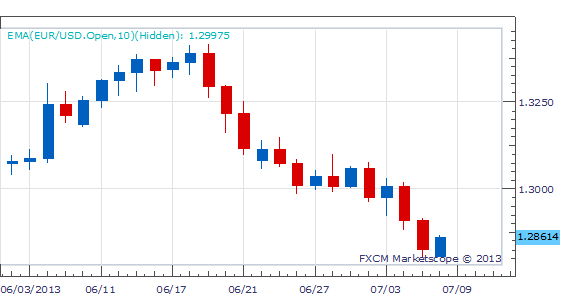 A Spoon Less of Sugar for the EU

It appears as though ECB members are starting the week off with a bit of damage control. It is no surprise. Since June 19th the Euro has fallen 4.16% against the greenback. During that same time period, Greek 10 year bond yields have shot up 7.11% and those from Portugal up 15.17%.

But why should we worry? This morning the German Finance Minister Wolfgang Schaeuble stated he is ‘confident’ in progress on Greece. The Austrian Finance Minister Ms. Fekter is ‘convinced’ as of Monday morning that Greece is working to meet the terms of aid. Meanwhile, the Sunday before last, Mr. Alexis Tsipras of the anti-bailout Syriza party collected 27% of the vote for the Greek Parliament—a six fold increase from the 2009 elections. The anti-bailout party is now the second largest in parliament. 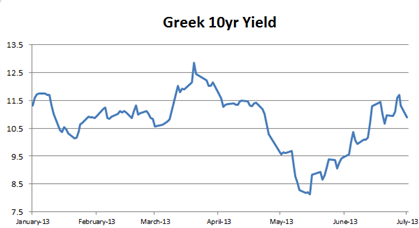 Mr. Schaeuble also spoke this morning in regards to Portugal saying the nation has overcome any political crisis and that a reshuffle will not change Portuguese policy; last week two Portuguese ministers resigned over austerity measures being imposed thus igniting fears across Europe. It seems as though a change in policy is what the country needs most.

In this morning’s attempt by European leadersto taper fears, they have simply shown their blindness to the current situation. The most baffling this Monday morning is the assertion by Mr. Draghi of the ECB who has urged Euro-Zone nations not to unravel progress achieved through fiscal reforms. This comes at a time when Portuguese public sector employees enjoy 35 hour capped workweeks and out of the 700,000 unemployed workers in Portugal, only 1.9% were former civil servants. (source: Bloomberg) 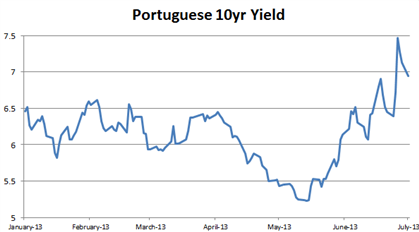 The theme remains that the citizens of crisis-prone European nations are adverse to the prescription that Mr. Draghi, Schaeuble and others wish to write. In combination with concerns of the taper, emerging markets and China, the greenback looks to benefit with Friday’s non-farm payroll improvements standing as a confirmation of steady, but stable growth.