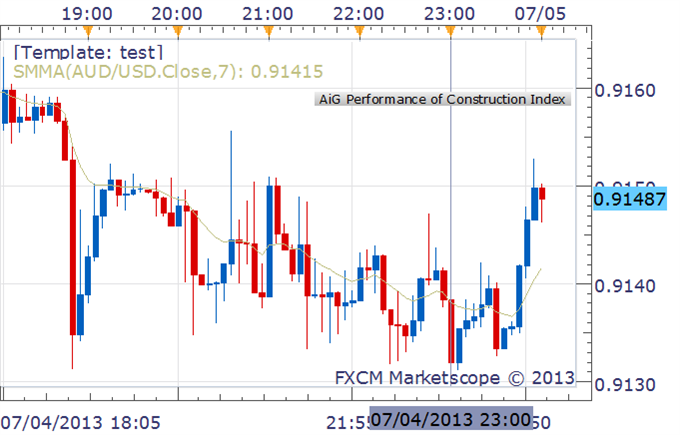 The Australian Dollar traded slightly lower against the US Dollar as the Australia’s construction industry showed signs of improvement in June. The Performance of Construction Index provided by AiG printed an improved 39.5 from the prior 35.3 but still remains below the expansionary 50 mark. This data marks the 36th consecutive month construction businesses have struggled with contraction and comes after a report that showed declined building approvals for the month of May. However, this information did not seem to move the pair significantly as it recovered shortly after the release.

As many sectors of the Australian economy continue to face contraction, the Reserve Bank of Australia may be more inclined to introduce additional stimulus. Although the RBA recently decided to keep their benchmark interest rate at 2.75%, the central bank maintains its “scope for further easing.” Central bank Governor Stevens has also introduced rhetoric that suggests a high probability for a rate cut in August, which could move AUD/USD lower.

US economic indicators tied to employment scheduled for release on Friday 12:30 GMT will likely be movers of the pair as they will influence investors’ expectations for the Federal Reserve’s monetary policy. A positive reading for June’s unemployment rate and change in NFPs may support the Fed’s plans for reducing stimulus and weigh on risk sentiment, moving AUD/USD lower. Alternatively, a disappointing report may support risk appetite, moving the pair higher.