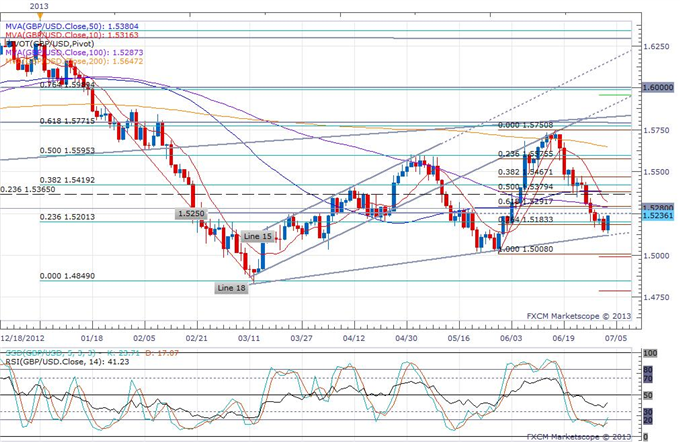 The UK services Purchasing Managers’ Index set a new 3-year high in June, thereby sending the British Pound higher. The PMI was reported at 56.9, beating expectations for 54.5 and higher than the 54.9 index result in May.

Services sector activity has increased for the sixth straight month, based on the index reported above the 50.0 neutral line. UK services employment increased at the fastest pace since August 2007, and confidence regarding future activity reached a 14 month high.

The positive economic release is significant ahead of tomorrow’s meeting of the Bank of England for the first time under Governor Marc Carney’s leadership. Expectations for the meeting are mixed, as an often dovish Carney faces a Monetary Policy Committee that has voted 6-3 against raising stimulus over the past five months. “With growth this strong, it’s hard to see how any of the members of the Monetary Policy Committee could make a case for further quantitative easing,” said Markit’s Chief Economist Chris Williamson.

The Pound has rallied about seventy points and above the 1.5200 line against the US Dollar, following the beat of expectations for the services PMI. GBP/USD may see resistance by a 100-day moving average currently at 1.5287, while a rising trend line from March may provide support around 1.5122.