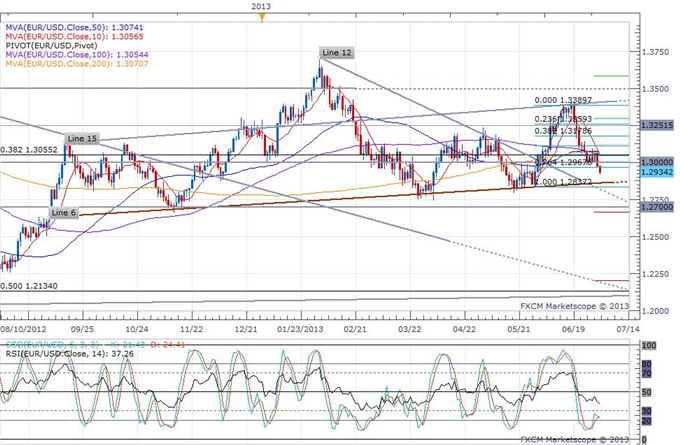 Euro Extends Decline Below 1.30 on a Lower PMI Revision

The Euro-zone composite Purchasing Managers’ Index rose to a yearly high in June, according to Markit’s final estimate. However, the 48.7 index result was slightly lower than a preliminary estimate of 48.9. The services PMI for the Euro-zone was also revised lower to 48.3, but still remained at a five month high in June. The composite output PMI indicated a decline in activity for the seventeenth straight month, as the index was again reported below the neutral 50.0 level.

The German PMI for services was also revised lower to 50.4 from 51.3, while the French services index was revised higher to 47.2. Germany’s measure of all-sector output measure was reported at 50.4. Employment again fell in June according to Markit, but at a weaker rate.

Markit reported that the indexes indicate a seventh quarter of economic contraction in the Euro-zone in the second quarter, likely seeing a second straight quarter of 0.2% GDP decline. “However, there is good reason to believe that the region is stabilizing and on course to return to growth during the second half of the year,” said Markit Chief Economist Chris Williamson.

The Euro continued to decline as the services PMI’s were announced in various countries around the Euro-zone, ahead of the final composite release. EUR/USD is trading around 1.2930 at the time of this writing and may see resistance by the key 1.3000 figure. The pair may see support by a rising trend line from September 2012.