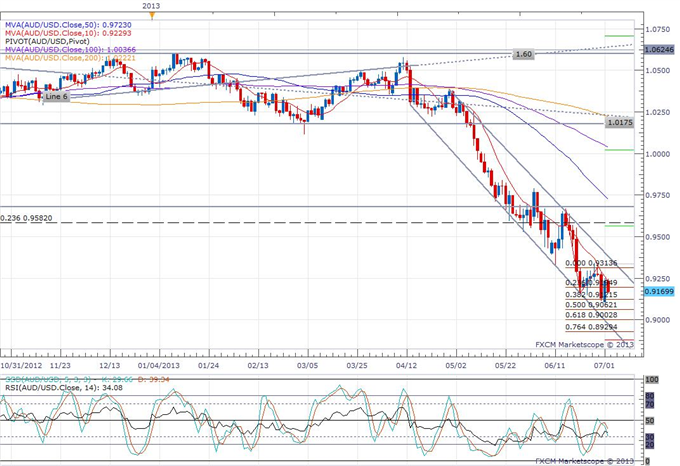 THE TAKEAWAY: RBA keeps the interest rate unchanged at 2.75% for the second month -> RBA mentions scope for further easing and a weaker AUD/USD level -> Aussie declines on RBA comments

The Reserve Bank of Australia kept its target interest rate unchanged at 2.75% for the second straight month following its July meeting, as was expected by a majority of Bloomberg surveyed analysts. The interest rate was cut 25 basis points to the record low 2.75% in May, and the target rate has been cut 2 percentage points since November 2011.

In comments released following the target rate announcement, the RBA said the annual inflation outlook may provide some scope for further easing, as inflation will remain consistent with the central bank’s target over the next 1-2 years. The RBA forecasted in June 3.0% inflation for 2013, at the high end of its 2-3% target inflation rate.

Even after the recent Aussie selloff, the RBA said it’s possible the Australian Dollar exchange rate may depreciate further, and a weaker AUD will help rebalance growth. The RBA also called the 0.6% growth in Q1 a bit below trend.

The Australian Dollar declined about seventy points against the US Dollar following the release of the RBA comments, as the talk of scope for further easing and a weaker Australian Dollar were perceived as dovish by the Forex markets. AUD/USD is now trading below 92.00, and may see support at .9107, by the 2.5 year low set yesterday.