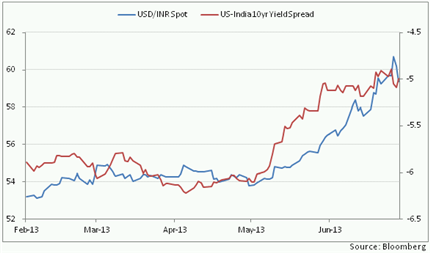 The Indian Rupee has jumped to the forefront of the financial media over recent weeks having slumped to a record low just shy of INR61 to the US Dollar. The drop has had little to do with the health of one of the world’s most talked-about emerging market economies. Rather, the driving force behind the Rupee’s aggressive losses – and in fact, behind the volatility noted in a wide range of assets across financial markets since late April – has been little more than a change in the tone of official commentary from the US Federal Reserve.

Imagine you are offered adjustable-rate mortgage with a very attractive, rock-bottom interest rate. The trick is the term of the loan is unknown to you, but the bank assures you that it won’t reset the rate for a very long time. You decide to take the money and use it to buy a house in a rapidly gentrifying part of town and over the course of a few years the value of the property appreciates handsomely. All is going well until suddenly you get a phone-call from the bank saying they’re looking to reset your interest rate and they might do it in the next few months, far sooner than you anticipated.

This is precisely the kind of scenario the markets found themselves facing as the Federal Reserve began to ramp up rhetoric suggesting it was planning to “taper” the size of monthly asset purchases made through the third round of its quantitative easing (QE) program. Essentially, the central bank put markets on notice that it was preparing to ease back on the downward pressure it was exerting on interest rates, and that it might begin to do so fairly soon.

Having taken advantage of QE to borrow cheap capital and invest it in higher-yielding assets, traders were now faced with the prospect of a near-term increase in the cost of continuing to finance their positions. Reasonably enough, some market participants decided to exit some of these bets before higher rates started to eat away at profits. Needless to say, it is far easier to liquidate an investment in financial instruments than sell a house, making for a speedy selloff across spectrum of so-called “risky assets” began, with the Rupee among them.

Indeed, the currency is tracking both the US-India 10 year bond yield spread – reflecting the influence of changing Fed expectations on USD/INR via a narrowing yield gap – and the MSCI Emerging Markets Index, a benchmark for stocks of companies in high-growth countries. Parallel moves have likewise emerged in rates-driven currencies in the G10 universe. In fact, the highest-yielding of the majors – the Australian Dollar – displays a nearly identical move against its US namesake as that of INR. 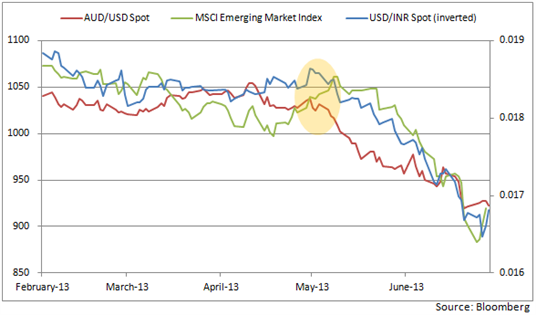