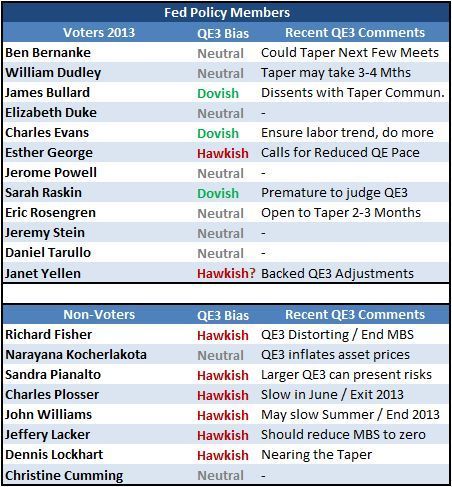 Fisher maintained his familiar hawkish tack echoing the consensus that tapering of the Fed’s massive asset purchase program - or QE as it is better known - will begin this year. Fisher echoed the June 19th announcement from Bernanke and took time to reiterate that any taper is more a ‘dialing back’ of QE over an outright exit. Cautioning any overreaction to Mr. Bernanke’s press conference, he referred to the behaviors of market participants over the past few days as like those of ‘feral hogs.’

In contrast, Kocherlakota took a more neutral stance and even made the dovish suggestion that QE, like any interest rate rises, should be data dependent. He cited FOMC inexperience with QE and insufficient guidance as shortfalls of the current policy. Kocherlakota went on to say that low inflation may warrant a longer period of Fed easing, yet did not comment specifically on adverse effects of extending asset purchases longer term.

These statements represent the bigger picture in that there are varying degrees of QE bias among voting and non-voting members. Although Kocherlakota commented that asset purchases should be inflation and unemployment data dependent, from last week’s meeting and press conference we can assert that the FOMC has grown wary of fueling another bubble. According to Fisher, a ‘significant majority’ backed Mr. Bernanke last week. Market participants have responded appropriately by sending US equities lower, as with the S&P 500 off almost 4.0 percent since Wednesday.

As Mr. Fisher suggested, there has been a ‘total fog’ over the fiscal outlook. Over the past few years, the Fed has chosen to further easing programs in the face of this fiscal gridlock. In effect, the Fed has bought Washington time to argue before some difficult fiscal decisions must be made. If last week’s press conference told the market anything, it is that the Fed will not and cannot continue these levels of quantitative easing indefinitely. In the words of Mr. Fisher once more, ‘there’s a limit’ to Fed’s balance sheet- and that is the most telling statement of all.

As the specter of peak QE comes into the market’s broader psyche, the threat is that money will slowly but surely will flow out of risky assets. In turn safe havens like the US Dollar stand to benefit as moral hazard based strength flags and sends investors seeking stability.