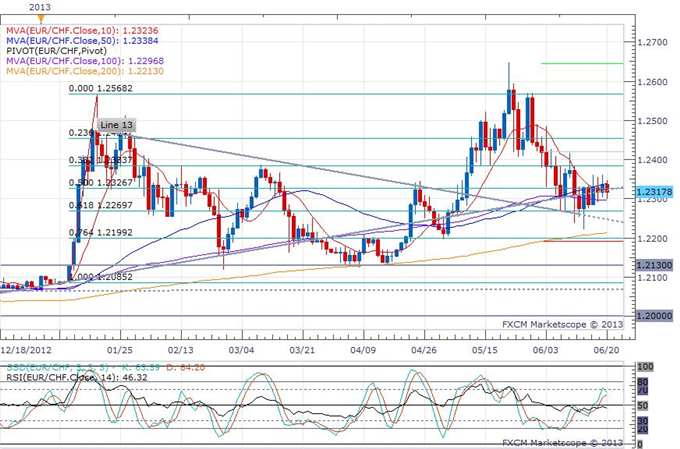 Franc Rises Despite SNB Commitment to Maintain Ceiling Against the Euro

Following the Swiss National Bank meeting, which only takes place every three months, the central bank announced that it will continue to maintain the 1.20 ceiling in Franc trading against the Euro. The SNB also left the target Libor rate for the next three months at 0.00%, as was expected by Bloomberg surveyed analysts.

The SNB further reiterated in June that it is ready to buy an unlimited quantity of foreign currencies to maintain its Franc ceiling, and said that the cap remains important in the current environment. The 1.20 floor in EUR/CHF trading has been enforced since September 2011.

Switzerland has seen annual deflation since September 2011, which allows the central bank to make unlimited foreign currency purchases without worries of driving up inflation. The SNB announced today that it lowered its price forecast to 0.3% deflation in 2013 and only 0.2% inflation in 2014. The central bank also predicted 1% to 1.5% GDP expansion in 2013 and warned of the risks coming from the international environment.

The Euro declined against the Franc towards 1.2300 despite the SNB’s commitment to continue devaluing its local currency, possibly due to the small expectation that the SNB might have raised the EUR/CHF floor higher. The pair may see resistance around 1.2200, a level which has seen both support and resistance in the past.