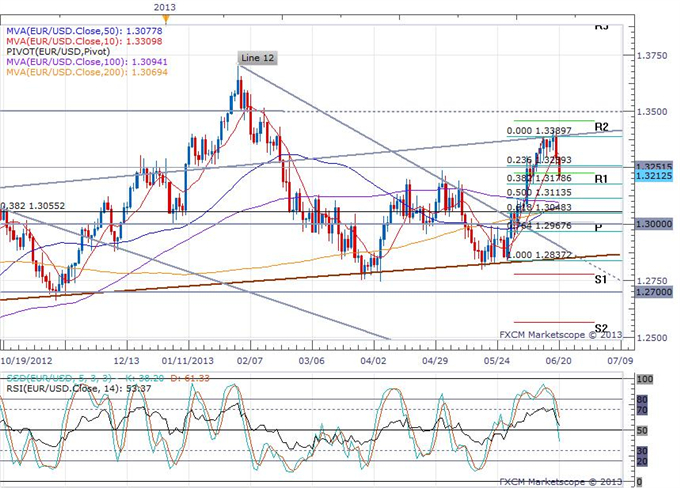 Euro Falls on an Unexpected Decline in German PMI

The composite output index rose to 48.9 in Markit’s preliminary estimate, beating expectations for 48.1 and up from 47.7 in May. The PMI for manufacturing climbed slightly more than expected to 48.7, and the services PMI beat expectation at 48.6, according to the initial June estimate. However, the composite output index remained below the 50.0 neutral line for the seventeenth consecutive month.

The German PMI for manufacturing declined to 48.7 in June, disappointing expectations for a rise to 49.9 from a survey result of 49.4 in May. The PMI for services rose to a better than expected 51.3 from 49.7 in May, but was unable to stop the damage done to the Euro by the weak manufacturing number. The lower PMI matches a recent Bundesbank prediction that the German economy will slow in the summer following strong growth in Q2.

The decline in new business in the Euro-zone was the slowest in five months, which is a good sign for the Euro-zone economy. Based on the June PMI’s, Markit is predicting that the Euro-zone economy saw the seventh straight quarter of recession in Q2. “However, the rate of contraction has eased over the course of the second quarter, with the decline in June the smallest for 15 months. At this rate, the region could stabilise in the third quarter and return to growth in the fourth quarter,” said Markit Chief Economist Chris Williamson.

The Euro declined to 1.3200 following the worse than expected German PMI for manufacturing, possibly on a worry that the Euro-zone’s biggest economy will see the Bundesbank predicted slowdown. EUR/USD may continue to see support by the broken resistance line around 1.3200, and the pair may find resistance by a four month high set recently at 1.3416.