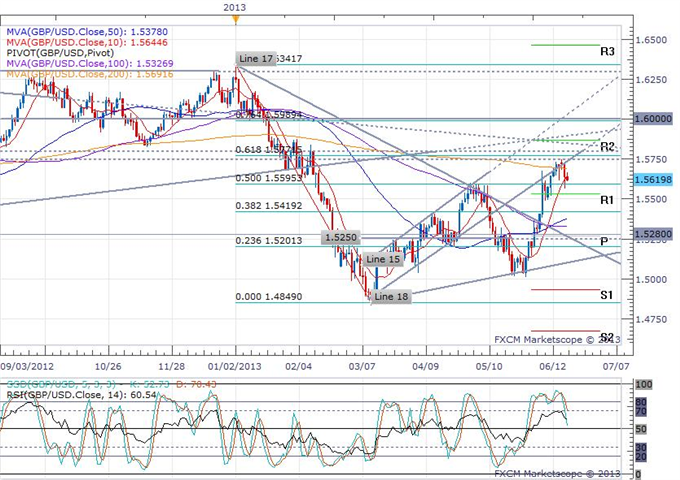 THE TAKEAWAY: BoE votes 6-3 to not raise stimulus in June -> Majority of MPC members see a sustained recovery -> Pound declines on a favorable inflation outlook

Bank of England Governor King and two of his colleagues on the Monetary Policy Committee were outvoted for the fifth consecutive month in a decision to not add 25 billion Pounds to the 375 billion asset purchase target. The vote to not change the 0.50% interest rate was again unanimous at the June BoE meeting, according to the minutes released today.

Majority of the Bank of England members believe that the current quantitative easing and funding for lending measures are still working their way through the economy, and the UK economic news is consistent with a slow and sustained recovery. On annual inflation, majority of the central bankers said the inflation rate may rise to 3% in the summer and the inflation outlook was more favorable.

The UK economy avoided a triple dip recession in Q1, when the GDP rose 0.3%. Markit said that current economic activity indicates a 0.5% rise in GDP in Q2, based on the Purchasing Managers’ Index through May. However, Governor King said in June that economic growth is not as fast as he would like.

King will be replaced in July by outgoing Bank of Canada Governor Mark Carney. Carney is perceived to have pro-stimulus views like his predecessor, but even if Carney does continue King’s vote to add to stimulus, it is unclear if he can convince a majority of the 9 member MPC to do the same. However, deputy governor Tucker, who has made up one of the six votes against additional stimulus, will leave his post in the fall. The new member of the MPC will need Carney’s stamp of approval.

The Pound declined against the US Dollar following the BoE minutes, possibly due to the lack of alarm over the higher than targeted inflation rates. A broken resistance line slightly below 1.5595 may now provide resistance for GBP/USD, and the pair may see resistance at a 4-month high recently set at 1.5751.