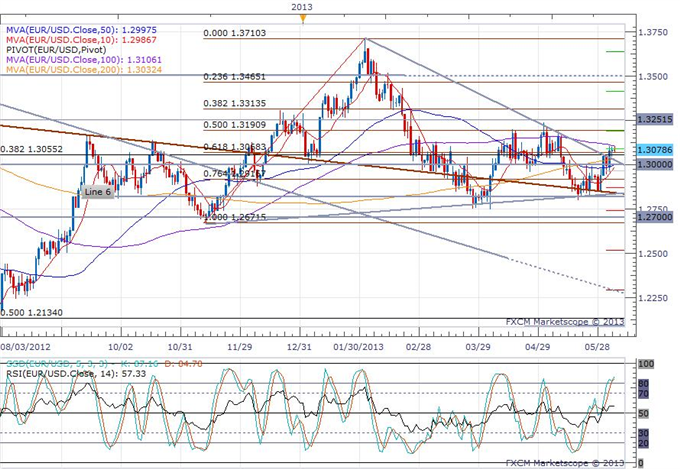 Euro-zone composite output declined for the 16th consecutive month in May, but the rate of decline hit a three month low, according to Markit’s composite output Purchasing Managers’ Index. The composite PMI was confirmed at 47.7 in a final estimate for May, following the 46.9 composite index result seen in April. The services PMI for May was revised lower to 47.2 from a previous estimate of 47.5, but still higher than the 47.0 services PMI in April. A PMI above 50.0 indicates sector activity expansion.

The German composite index showed a slight rise in output at 50.2, while the Spanish composite output index reached a 23-month high in May at 47.2. New business contracted for the twenty second consecutive month, according to Markit, and job losses were reported for the seventeenth consecutive month.

Markit’s Chief Economist Chris Williamson said the May PMI’s indicate that the six-quarter recession is likely to continue into a seventh quarter in Q2 of 2013, with the index pointing to 0.2% GDP contraction. “The reality is that the region lacks any growth drivers, making it difficult to believe that anything better than a mere stabilisation of economic activity remains unlikely for the foreseeable future,”said Williamson.

The Euro showed little reaction to the downward revision of the services PMI, and EUR/USD continues to trade slightly below 1.3100 in Forex markets. The pair may see resistance at 1.3191, by the 50% retracement of the rise from November’s low to February’s high, and support may be provided by the key 1.3000 figure.