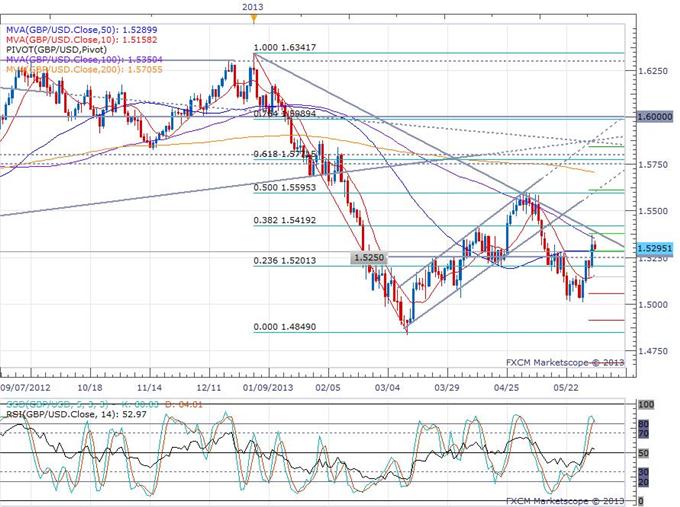 Pound Fails to Hold Gains on a PMI Construction Beat

THE TAKEAWAY: UK PMI for construction reported at 50.8 -> PMI above neutral line for the first time in seven months -> Pound fails to maintain gains

The UK construction sector showed expanding activity for the first time in seven months, according to Markit’s Purchasing Managers’ Index. The construction PMI for May was reported at 50.8, beating expectations for 49.8 and higher than 49.4 in April. A PMI above 50.0 indicates expanding sector activity.

The improving construction activity was largely driven by improvements in the residential building sub-sector, according to Markit. There was a rise in overall construction output in May, supported by the first improvement in new business volumes in a year.

The rise in the PMI for construction follows yesterday’s release of a 14-month high UK manufacturing PMI. The UK economy returned to expansion in Q1, with a 0.3% rise to GDP, and Pound investors are looking for further economic expansion in Q2. “While the latest survey provides some hope that rising construction output will support UK GDP in the second quarter, the sector remains unlikely to contribute positively to labor market conditions,” said Markit Senior Economist Tim Moore.

The Pound saw some initial gains following the better than expected PMI release, but those gains were soon paired and GBP/USD fell back below 1.5300. The pair may now continue to see support around 1.5250, and resistance may be provided around 1.5419, by the 38.2% retracement of the decline from January’s high to March’s low.